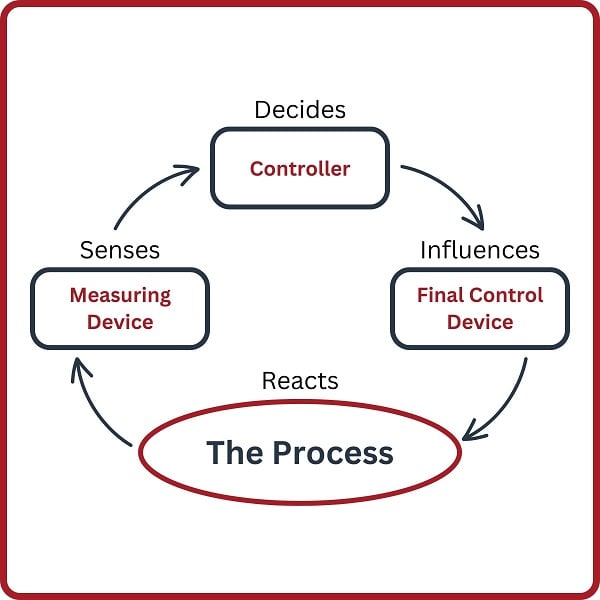 Diagnosing faults in a feedback control loop involves understanding the input and output of each step to eliminate problem areas, since each component affects all others.

Negative feedback systems, in general, tend to cause confusion for those first learning their fundamental principles and behaviors. The closed-cycle “loop” formed by the interaction of sensing elements, controller, final control elements, and process means essentially that everything affects everything else. This is especially problematic when the feedback control system in question contains a fault and must be diagnosed. For example, if an operator happens to notice that the process variable (as indicated by a manual measurement or by some trusted indicating instrument) is not holding to setpoint, it could be the result of a fault in any portion of the system (sensor, controller, FCE, or even the process itself).

Elements of the Feedback Control Loop 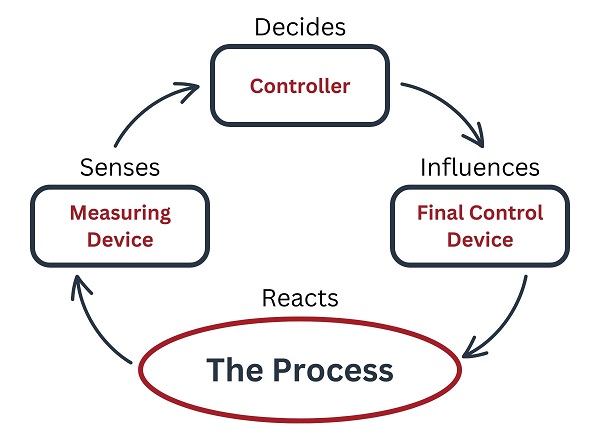 One of the basic diagnostic strategies for any instrumentation system is to assess whether the input value(s) and output value(s) correspond for each instrument. We may apply this same strategy to each of the four elements of a feedback control “loop” to identify where the problem might exist. If you encounter one of these four system portions whose output does not correspond with its input, you know that portion of the system is faulted.

You can check each element of your feedback control loop by comparing its input with its output to see if each element is doing what it should. I recommend beginning with the controller (the decision-making element) because typically those values are the most easily monitored:

Carefully examine the controller faceplate, looking at the values of PV, SP, and output. Is the controller taking appropriate action to force PV equal to SP? In other words, is the output signal at a value you would expect if the controller were functioning properly to regulate the process variable at setpoint? If so, then the controller’s action and tuning are most likely not at fault. If not, then the problem definitely lies with the controller.