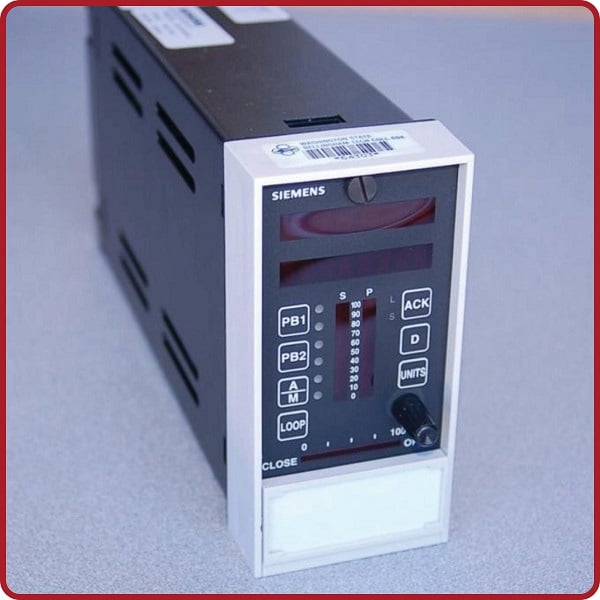 Digital PID controllers include advanced features beyond calculating output signals. These include tracking of values, alarms, limits, and security and access restrictions.

In order for any PID controller to be practical, it must be able to do more than just implement the PID equation. This section identifies and explains some of the basic features found on most (but not all!) modern PID controllers:

When a controller continually calculates output values based on PV and SP values over time, it is said to be operating in automatic mode. This mode, of course, is what is necessary to regulate any process. There are times, however, when it is desirable to allow a human operator to manually “override” the automatic action of the PID controller. Applicable instances include process start-up and shut-down events, emergencies, and maintenance procedures. A controller that is being “overridden” by a human being is said to be in manual mode.

An extension of this “mode” concept applies to controllers configured to receive a setpoint from another device (called a remote or cascaded setpoint). In addition to an automatic and a manual mode selection, a third selection called cascade exists to switch the controller’s setpoint from human operator control to remote (or “cascade”) control.

This can be very frustrating to the human operator, who may wish to use the controller’s manual mode as a way to change the controller’s bias value. Imagine, for example, that a PD controller (no integral action) is operating in automatic mode at some low output value, which happens to be too low to achieve the desired setpoint. The operator switches the controller to manual mode and then raises the output value, allowing the process variable to approach setpoint. When PV nearly equals SP, the operator switches the controller’s mode back to automatic, expecting the PID equation to start working again from this new starting point. In a crude controller, however, the output would jump back to some lower value, right where the PD equation would have placed it for these PV and SP conditions.

Without setpoint tracking, the operator would have to make a setpoint adjustment either before or after switching the controller from manual mode to automatic mode, in order to ensure the controller was properly set up to maintain the process variable at the desired value. With setpoint tracking, the setpoint value will default to the process variable value when the controller was last in manual mode, which (it is assumed) will be close enough to the desired value to suffice for continued operation.

Unlike output tracking, for which there is virtually no reason not to have the feature present in a PID controller, there may very well be applications where we do not wish to have setpoint tracking. For some processes, the setpoint value should remain fixed at all times, and as such it would be undesirable to have the setpoint value drift around with the process variable value every time the controller was placed into manual mode.

A common feature on many instrument systems is the ability to alert personnel to the onset of abnormal process conditions. The general term for this function is alarm. Process alarms may be triggered by process switches directly sensing abnormal conditions (e.g. high-temperature switches, low-level alarms, low-flow alarms, etc.), in which case they are called hard alarms. A soft alarm, by contrast, is an alarm triggered by some continuous measurement (i.e. a signal from a process transmitter rather than a process switch) exceeding a pre-programmed alarm limit value.

Since PID controllers are designed to input continuous process measurements, it makes sense that a controller could be equipped with programmable alarm limit values as well, to provide “soft” alarm capability without adding additional instruments to the loop. Not only is PV alarming easy to implement in most PID controllers, but deviation alarming is easy to implement as well. A “deviation alarm” is a soft alarm triggered by excessive deviation (error) between PV and SP. Such an event indicates control problems, since a properly-operating feedback loop should be able to maintain reasonable agreement between PV and SP at all times.

Alarm capabilities find their highest level of refinement in modern distributed control systems (DCS), where the networked digital controllers of a DCS provide convenient access and advanced management of hard and soft alarms alike. Not only can alarms be accessed from virtually any location in a facility in a DCS, but they are usually time-stamped and archived for later analysis, which is an extremely important feature for the analysis of emergency events, and the continual improvement of process safety.

In some process applications, it may not be desirable to allow the controller to automatically manipulate the final control element (control valve, variable-speed motor, heater) over its full 0% - 100% range. In such applications, a useful controller feature is an output limit. For example, a PID flow controller may be configured to have a minimum output limit of 5%, so that it is not able to close the control valve any further than the 5% open position in order to maintain “minimum flow” through a pump. The valve may still be fully closed (0% stem position) in manual mode, but just not in automatic mode.

Similarly, setpoint values may be internally limited in some PID controllers, such that an operator cannot adjust the setpoint above some limiting value or below some other limiting value. In the event that the process variable must be driven outside these limits, the controller may be placed in manual mode and the process “manually” guided to the desired state by an operator.

There is justifiable reason to prevent certain personnel from having access to certain parameters and configurations on PID controllers. Certainly, operations personnel need access to setpoint adjustments and automatic/manual mode controls, but it may be unwise to grant those same operators unlimited access to PID tuning constants and output limits. Similarly, instrument technicians may require access to a PID controller’s tuning parameters, but perhaps should be restricted from editing configuration programs maintained by the engineering staff.

Most digital PID controllers have some form of security access control, allowing for different levels of permission in altering PID controller parameters and configurations. Security may be crude (a hidden switch located on a printed circuit board, which only the maintenance personnel should know about), sophisticated (login names and passwords, like a multi-user computer system), or anything in between, depending on the level of development invested in the feature by the controller’s manufacturer.

An interesting solution to the problem of security in the days of analog control systems was the architecture of Foxboro’s SPEC 200 analog electronic control system. The controller displays, setpoint adjustments, and auto/manual mode controls were located on the control room panel where anyone could access them. All other adjustments (PID settings, alarm settings, limit settings) could be located in the nest area where all the analog circuit control cards resided. Since the “nest” racks could be physically located in a room separate from the control room, personnel access to the nest room served as access security to these system parameters.

At first, the concept of controller parameter security may seen distrustful and perhaps even insulting to those denied access, especially when the denied persons possess the necessary knowledge to understand the functions and consequences of those parameters. It is not uncommon for soft alarm values to be “locked out” from operator access despite the fact that operators understand very well the purpose and functions of these alarms. At some facilities, PID tuning is the exclusive domain of process engineers, with instrument technicians and operators alike barred from altering PID tuning constants even though some operators and many technicians may well understand PID controller tuning.

When considering security access, there is more to regard than just knowledge or ability. At a fundamental level, security is a task of limiting access commensurate with responsibility. In other words, security restrictions exist to exclude those not charged with particular responsibilities. Knowledge and ability are necessary conditions of responsibility (i.e. one cannot reasonably be held responsible for something beyond their knowledge or control), but they are not sufficient conditions of responsibility (i.e. knowing how to, and being able to perform a task does not confer responsibility for that task getting completed). An operator may very well understand how and why a soft alarm on a controller works, but the responsibility for altering the alarm value may reside with someone else whose job description it is to ensure the alarm values correspond to plant-wide policies.