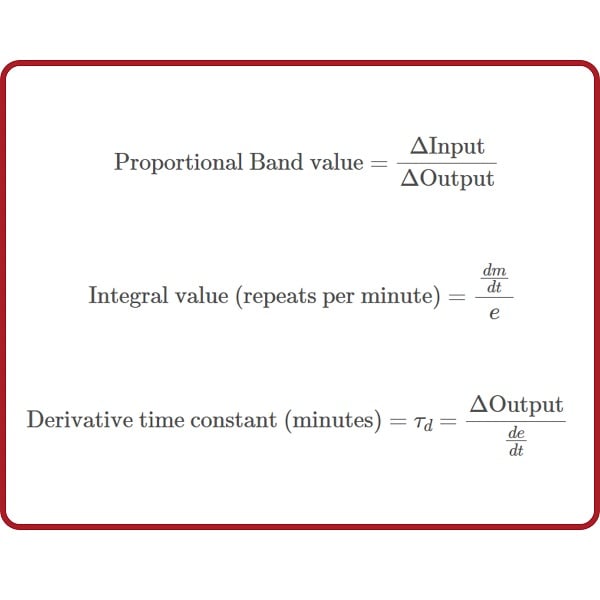 PID controllers are the complete physical or software objects that allow systems to respond to control inputs with just the right rate and accuracy to produce optimized operation.

PID control can be a confusing concept to understand. Here, a brief summary of each term within PID (P. I, and D) is presented for your learning benefit.

Mathematically defined, proportional action is the ratio of output change to input change. This may be expressed as a quotient of differences, or as a derivative (a rate of change, using calculus notation):

For example, if the PV input of a proportional-only process controller with a gain of 2 suddenly changes (“steps”) by 5 percent, and the output will immediately jump by 10 percent (\(\Delta\)Output = Gain \(\times\) \(\Delta\)Input). The direction of this output jump in relation to the direction of the input jump depends on whether the controller is configured for direct or reverse action.

A legacy term used to express this same concept is proportional band: the mathematical reciprocal of gain. “Proportional band” is defined as the amount of input change necessary to evoke full-scale (100%) output change in a proportional controller. Incidentally, it is always expressed as a percentage, never as fraction or as a per unit value:

Integral – sometimes called reset or floating control – is a control action causing the output signal to change over time at a rate proportional to the amount of error (the difference between PV and SP values). Integral controller action responds to error accumulated over time, ramping the output signal are far as it needs to go to completely eliminate error. If proportional (P) action tells the output how far to move when an error appears, integral (I) action tells the output how fast to move when an error appears. If proportional (P) action acts on the present, integral (I) action acts on the past. Thus, how far the output signal gets driven by integral action depends on the history of the error over time: how much error existed, and for how long. When you think of “integral action” (I), think impatience: this control action drives the output further and further the longer PV fails to match SP.

Mathematically defined, integral action is the ratio of output velocity to input error:

Mathematically defined, derivative action is the ratio of output offset to input velocity:

For example, if the PV signal begins to ramp at a rate of 5% per minute on a process controller with a derivative time constant of 4 minutes, the output will immediately become offset by 20% (\(\Delta\)Output = Derivative_value \(\times\) \(de \over dt\)). In most PD and PID controllers, derivative response is also multiplied by proportional gain, so the same conditions applied to a PD controller that happened to also have a gain of 2 would result in an immediate offset of 40% (\(\Delta\)Output = Gain_value \(\times\) Derivative_value \(\times\) \(de \over dt\)). The direction (sign) of this offset in relation to the direction of the input ramping depends on whether the controller is configured for direct or reverse action.