Let us begin with the definition of proportional control (PC). A control system designed following the PC method works with a set point value and a present value. The set point is the target value for the system's output, while the present value is the latest output measurement fed back to the controller as an input. 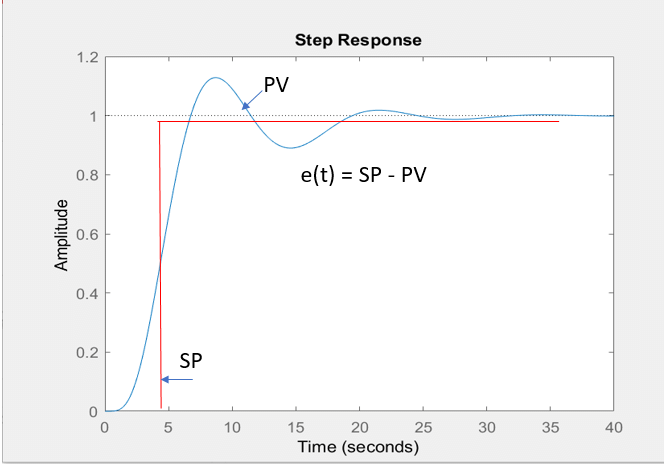 Figure 1. A typical response of a controlled variable in a proportional control system. Image used courtesy of H. Bryan Riley

The difference between the set point and present values is called an error. Therefore:

The main goal of the proportional controller is to minimize error. Ideally, the error would be zero, but that is not what happens with most real-life controlled variables (temperature, flow, pressure, torque).

In a PI controller, mathematical integration is applied with proportional control to reduce the offset further. The integral element adjusts the controller response based on historical information about the error.

Perhaps the most widely used form of controller in today’s applications (thanks to the benefits of incredible algorithm processing speed in even the most basic modern CPUs). Simply put, a PID controller combines all the previous functions and calibrates them with advanced algorithms.

As we have seen, all these controllers follow the PC method. Now let us take a step back and discuss gain and band.

This also explains why this method has the word “proportional” in it. It is because the controller’s output is directly proportional to the error. The gain determines that proportion or ratio.

The proportional gain is the ratio of a change in the output to a change in the input. It answers the question, how much will my output change if I change my input this much?

Let us use an example. The most popular signal transmission standard in control automation is the 4-20 mA DC range, where 4 mA represents 0%, and 20 mA is 100% scale-wise. We have a controlled system that handles inputs and outputs within this range. In this system, every time the input changes by 1 mA, the output changes by 3 mA. The gain is calculated as follows:

In other words, in this system, every change in output is three times as large as the change in the input. 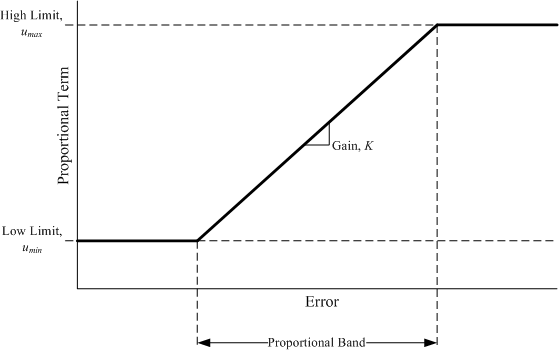 The graph above shows the same straight-line equation of proportional output or term (\(P_{out}\)) versus error. Remember that the error is simply the difference between the set point and the present values. The gain (\(K_p\)) is also shown as the slope of the straight line.

All process controllers have upper (\(u_{max}\)) and lower (\(u_{min}\)) range limits. In the transmission standard discussed before, is \(u_{min}\) = 4 mA and \(u_{max}\) = 20 mA. So, the proportional band tells us how much we can affect our controlled variable within the operating range of our controller. It is also known as the throttling range.

The proportional band has an inverse relation to the gain, thus, the formula to calculate it is simple:

The PB is also expressed as a percentage. In our previous example, the gain of the process was 3; then, the proportional band would be 1/3 or 33.33% of the controlled output.

PID controls are typically handled by algorithms designed by the product manufacturer. However, understanding the proper use of each proportional, integral, and derivative function can allow fine-tuning for nearly any system. The relationship between proportional gain and band is a fundamental concept of control engineering.

Interested in learning more about PID controls and gain?