What is Proportional Gain?

What is Proportional Gain?

This article discusses the meaning and effects of proportional gain in a controlled system.

In a controlled system, feedback is important to ensure that a needed action actually has happened. If a sensor can read information about the current operating status of the equipment, the control system must calculate the required output action needed to reach the next step, and this repeats until the goal has been reached.

The controller can be programmed to send an output signal proportional to the current distance from the goal point - large output if far away, small output as the goal gets closer. This is Proportional Gain.

The Meaning of Proportional Gain

Imagine you are in your car, driving down the highway. The speed limit is 55, so of course, you are doing 60, when far ahead you see a red stoplight at an intersection. Since you are the controller of the car, you immediately recognize this as the ‘Set Point’ or goal position which must reach and come to a stop.

You continue driving 60 until you cross the white line at the intersection and then instantly remove your foot from the gas pedal. Of course not! You know what would happen if you waited until reaching the intersection to remove the throttle. The car’s momentum would carry you far past the intersection, most likely leading to a tragic collision.

This example illustrates the most basic form of feedback control which uses a discrete signal (or on/off only) to alert the controller when the Set Point (SP) is reached. In this type of control system, the output is driven at 100% until the SP is reached, then the output is reduced to 0%. If the system has a good deal of inertia, the momentum will carry it beyond the SP in a condition called overshoot.

To connect this to a real-life process, imagine a hydraulic cylinder controlled with an analog 0-10v valve. The movement must be very fast, and it must reach the SP with as little overshoot as possible. A magnetic sensor on the outside of the cylinder reacts when the cylinder reaches the set position. A fully open valve will drive the cylinder motion quickly, but it will be unable to stop quickly when the magnetic sensor is tripped.

In nearly every control system setting, it is imperative to find more precise measuring sensors. In this hydraulic cylinder, an internal Temposonic sensor may be installed, or perhaps it’s an encoder for RPM measurements, possibly a pressure gauge for vacuum systems, or a temperature sensor for systems that rely on heating liquids or gasses. In all of these cases, an analog information source can provide not just an alert of reaching a SP, but also a known position the entire time the system is in motion - even if it shoots beyond the set point.

Even if a driver is not aware of the mental math, there is somewhat of a calculation happening, based on the difference between the car’s current location and the location of the goal position.

This difference between the current value of the system (often called the Process Variable or PV) and the goal position SP is referred to as ‘Error’.

There are three possible conditions of error.

An error of 0 is only achieved if the current PV lands perfectly on the SP. This of course is the ultimate goal of the control system. A negative error occurs when either the system has overshot the SP, or if the SP has been adjusted to a lower value and the system must be returned back to a matching value.

Based on these three conditions, we can see that the error is the greatest as soon as a change is ordered. At the beginning of a shift, or a change in product type which requires a large SP adjustment, the error will be at a maximum, and the output signal should also be at a maximum to meet it.

We can take the raw error, defined above, and multiply it by a predetermined number called the ‘Proportional Gain’ which has the abbreviation Kp:

For a low value of Kp, the output signal will be smaller. This means the system will be slower to respond, perhaps seeming a bit sluggish. With a low Kp value, it will also reach a point where the output signal is so small that it can’t overcome the opposing force of the system and basically stall - never quite reaching the SP. This is called ‘steady-state error’ since there is still a bit of error present once the system has stopped responding and become steady.

On the positive side, a low value of Kp can ensure that there is minimal system overshoot, since the output is going quite slowly by the time it reaches the SP.

Naturally, when the Kp is increased, the opposite effect is true from what is listed above. 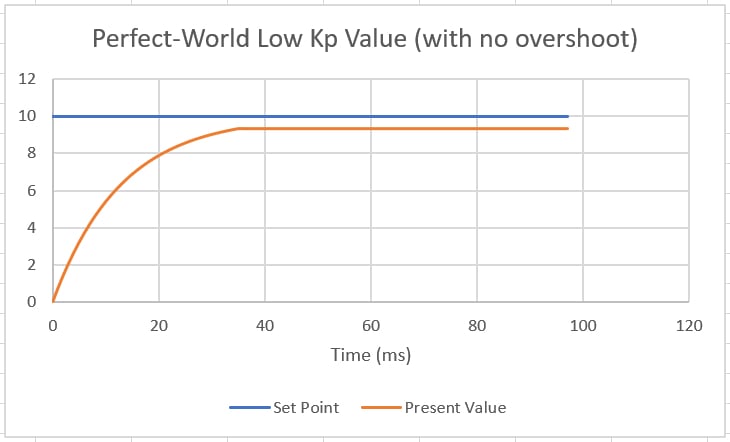 A graph of a system response with only a low Proportional Gain value of 0.075. Note the response time is quite slow and the system fails to reach the final SP. However, it will not overshoot the SP. 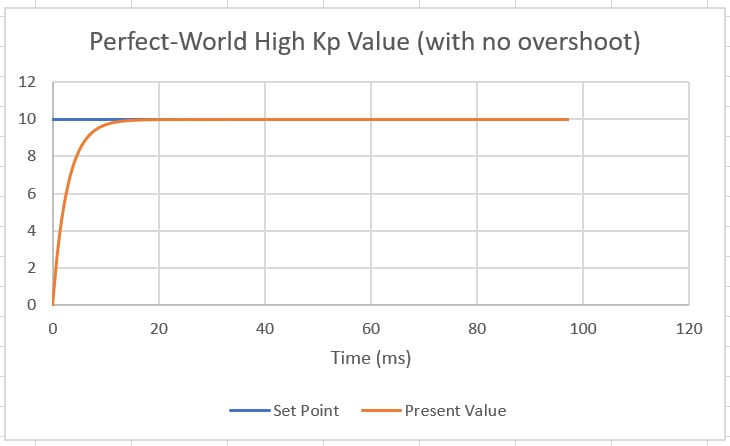 A graph of a system response with only a high Proportional Gain value of 0.3. Note the quick time to rise and settle right on the SP line. In the real world, there would be some sort of inertia leading to overshoot, this is simply a simulation of a system response.

The effects from Proportional Control can never lead to a perfect system which responds instantly, with zero overshoot, and zero steady-state error. Adjustments in the value will lead to compromises which simply must be accepted. The further addition of Integral and Derivative control terms can greatly improve the system response and error.