Regardless of valve type, all stem-actuated control valves require some form of seal allowing motion of the stem from some external device (an actuator) while sealing process fluid so no leaks occur between the moving stem and the body of the valve. The general term for this sealing mechanism is packing.

This mechanical feature is not unlike the stuffing box used to seal seawater from entering a boat or ship at the point where the propeller shaft penetrates the hull:

The fundamental problem is the same for the ship as it is for the control valve: how to allow a moving shaft to pass through what needs to be an impenetrable barrier to some fluid (in the case of the ship’s hull, the fluid is seawater). The solution is to wrap the shaft in a flexible material that maintains a close fit to the shaft without binding its motion. Traditional packing material for ship propeller shafts is flax rope. Some form of lubrication is usually provided so this packing material does not impose excessive friction on the shaft’s motion.

Modern marine stuffing boxes use advanced materials such as Teflon (PTFE) or graphite instead of flax, which wear longer and leak less water. In the world of control valves, the traditional packing material used to be asbestos (shaped into rings or ropes, much like flax used to be shaped for use in stuffing boxes), but is now commonly Teflon or graphite as well.

In the case of a ship’s stuffing box, a little bit of water leakage is not a problem since all ships are equipped with bilge pumps to pump out collected water over time. However, leakage is simply unacceptable in many industrial control valve applications where we must minimize fugitive emissions. A “fugitive emission” is any unwanted escape of process substance into the surrounding environment, usually from leaks around the pump and valve shafts. Special “environmental” packing sets are available for control valve applications where this is a concern.

Packing in a sliding-stem valve fits in a section of the valve body called the bonnet, shown in this simplified diagram of a single-ported, stem-guided globe valve: 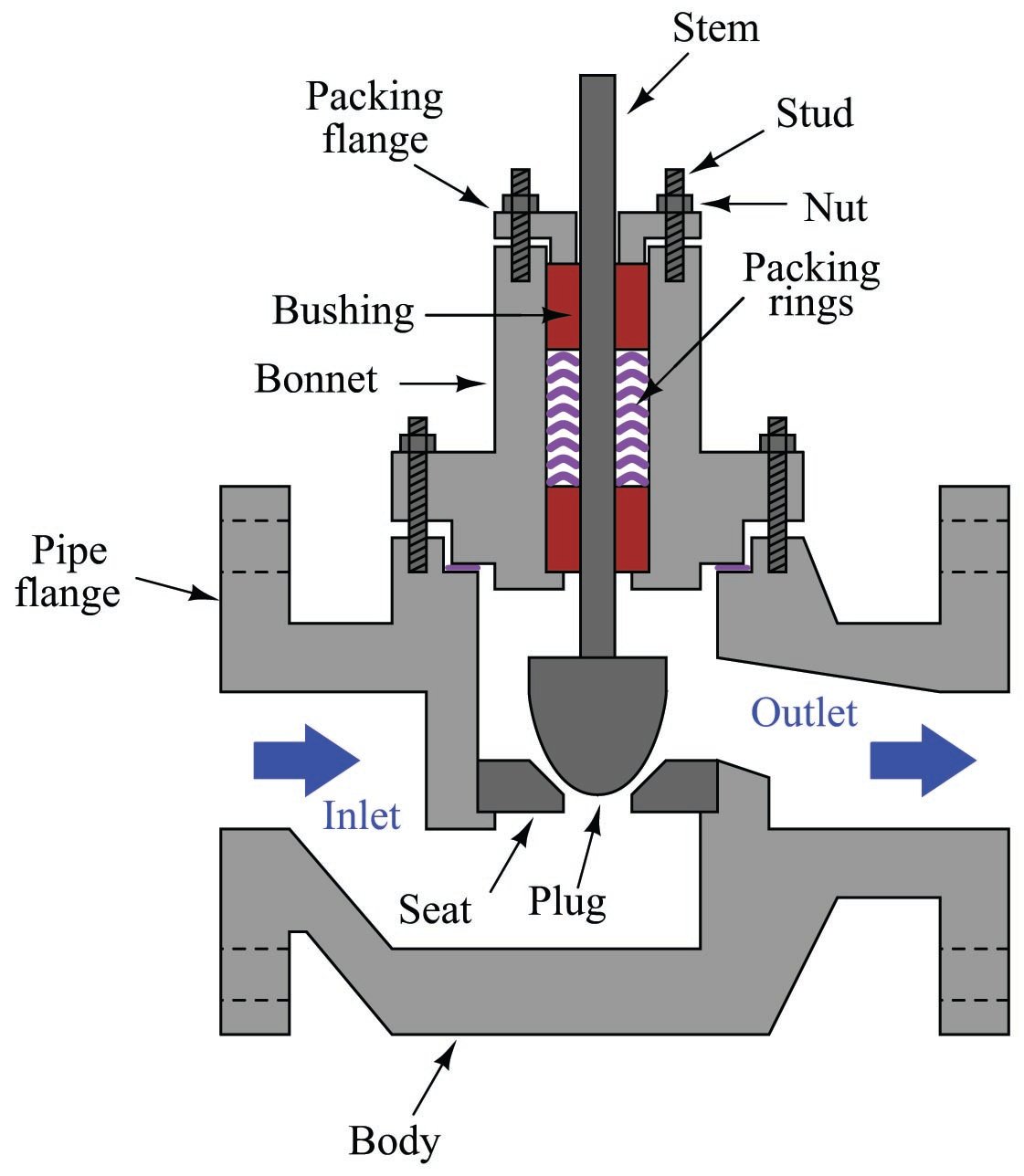 Two nuts threaded onto studs maintain proper force on the packing rings. Care must be taken not to over-tighten these nuts and over-compress the packing material, or else the packing will create excessive friction on the valve stem. Not only will this friction impede precise valve stem motion, but it will also create undue wear on the stem and packing, increasing the likelihood of future packing leakage. Insufficient packing flange force will lead to poor sealing, with process fluid potentially leaking past the packing and out of the valve.

A closer look at the bonnet shows a multitude of components working together to form a low-friction, pressure-tight seal for the moving valve stem: 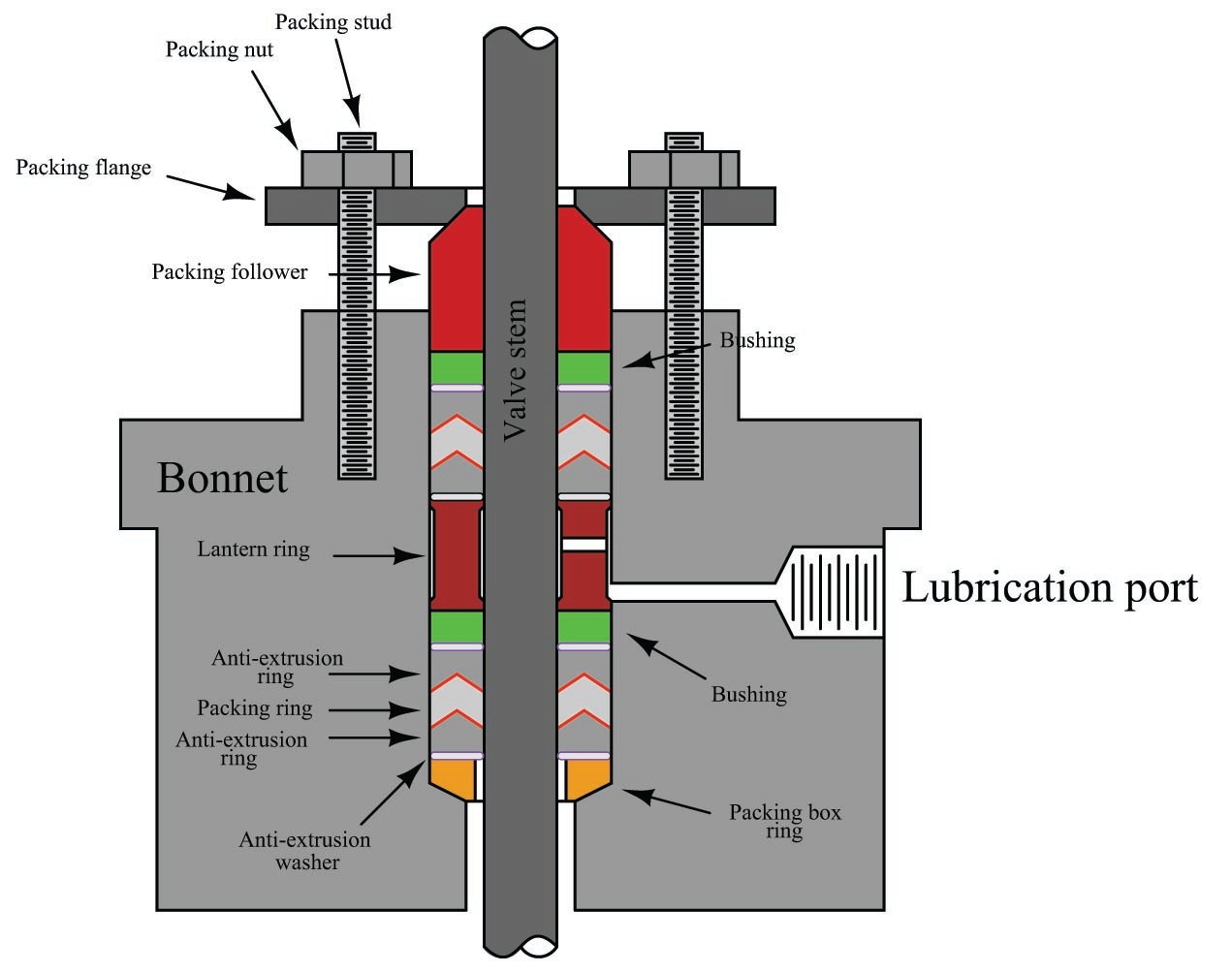 In this diagram, we see two sets of packing rings separated by a metal piece called a lantern ring. The lantern ring acts as a spacer allowing lubricant introduced through the lubrication port to enter into both packing sets from the middle of the bonnet.

One must be very careful when torquing the packing nuts on a stationary-loaded packing set. Insufficient torque (which translates into insufficient stress applied to the packing) will result in process fluid leakage. Excessive torque (causing excessive stress on the packing) will result in high valve stem friction and premature packing failure. The latter scenario is what one usually finds in industrial settings, where well-intentioned but uninformed personnel over-tighten valve packing in an effort to prevent leaks. The proper remedy for a packing assembly that leaks despite having been properly torqued is the replacement, not further tightening.

An alternative to “stationary” loading is to insert a metal spring into the packing assembly so that the elasticity of the spring helps to maintain an appropriate amount of packing stress as the packing material wears and ages. This is called live loading, examples of which are shown here: 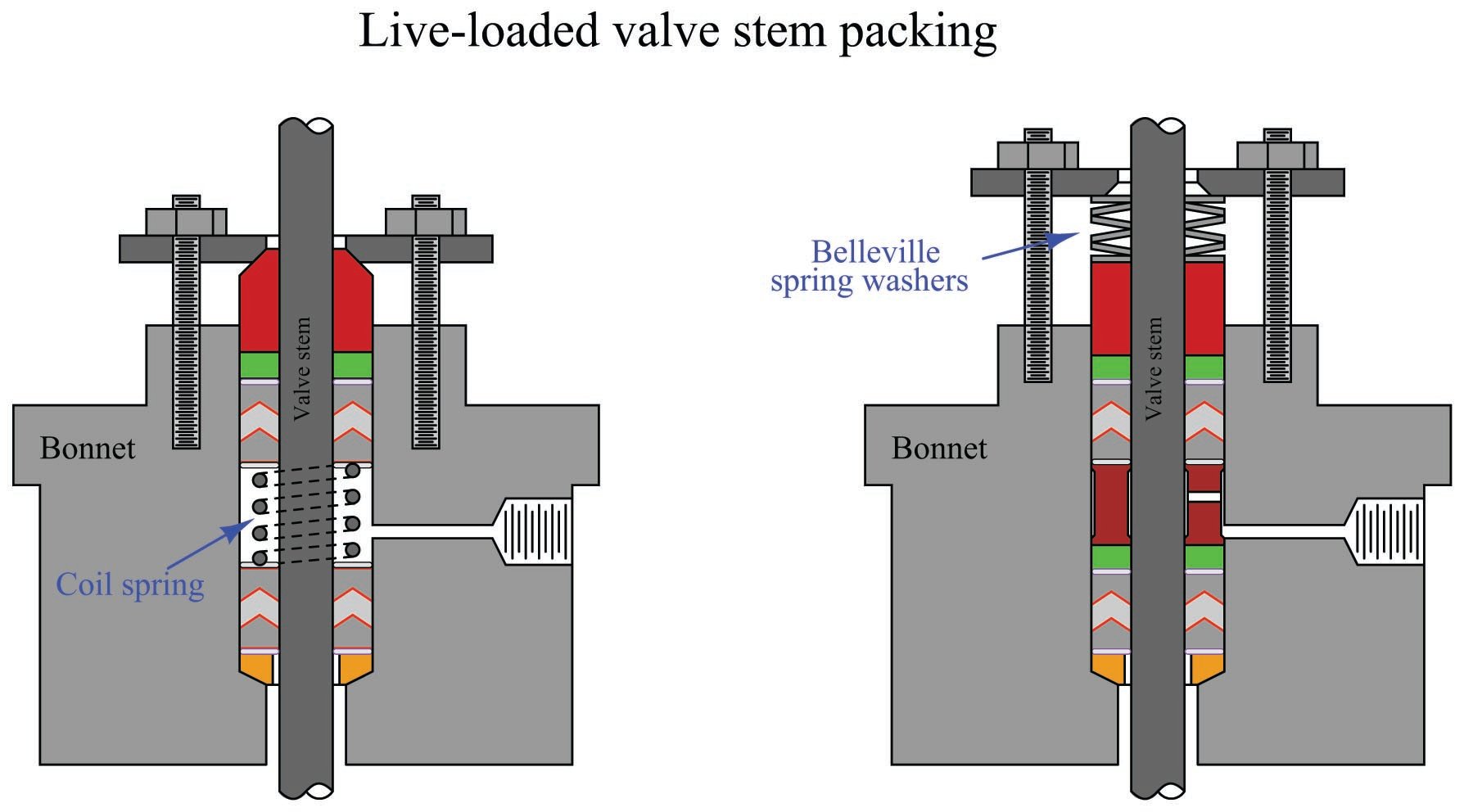 In one of these examples we see a coil spring inside the bonnet used to live-load the packing. In the other example we see a set of spring-steel washers known as a Belleville spring. Belleville springs have a concave profile, giving them resistance to compression along the shaft axis. These spring washers are always stacked in opposed pairs (concave against concave, convex against convex) so the washers have room to compress.

Photographs taken of an actual valve packing assembly removed from the bonnet (left) and re-assembled on the valve stem (right) reveal the structure of the packing and associated components. 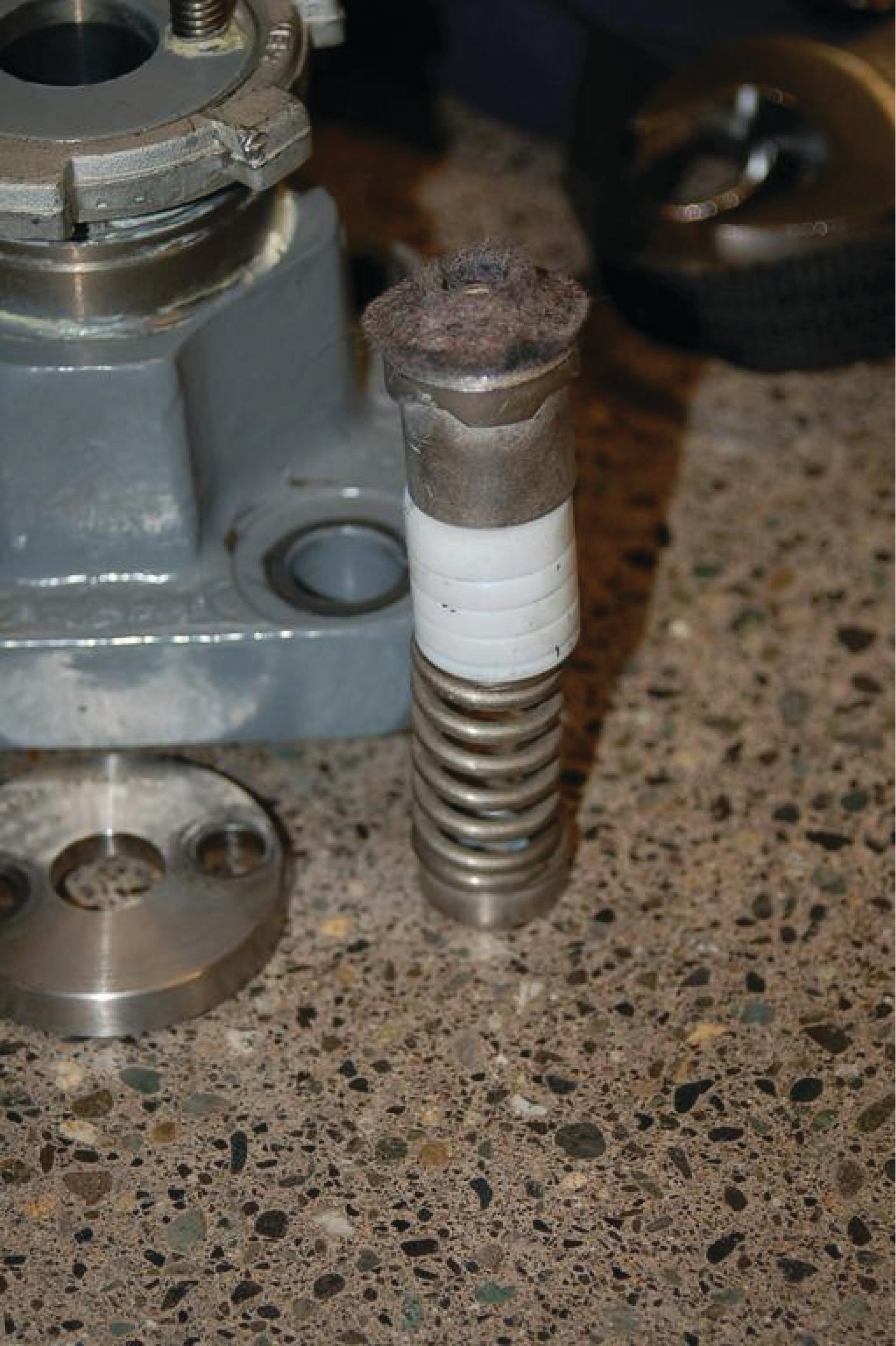 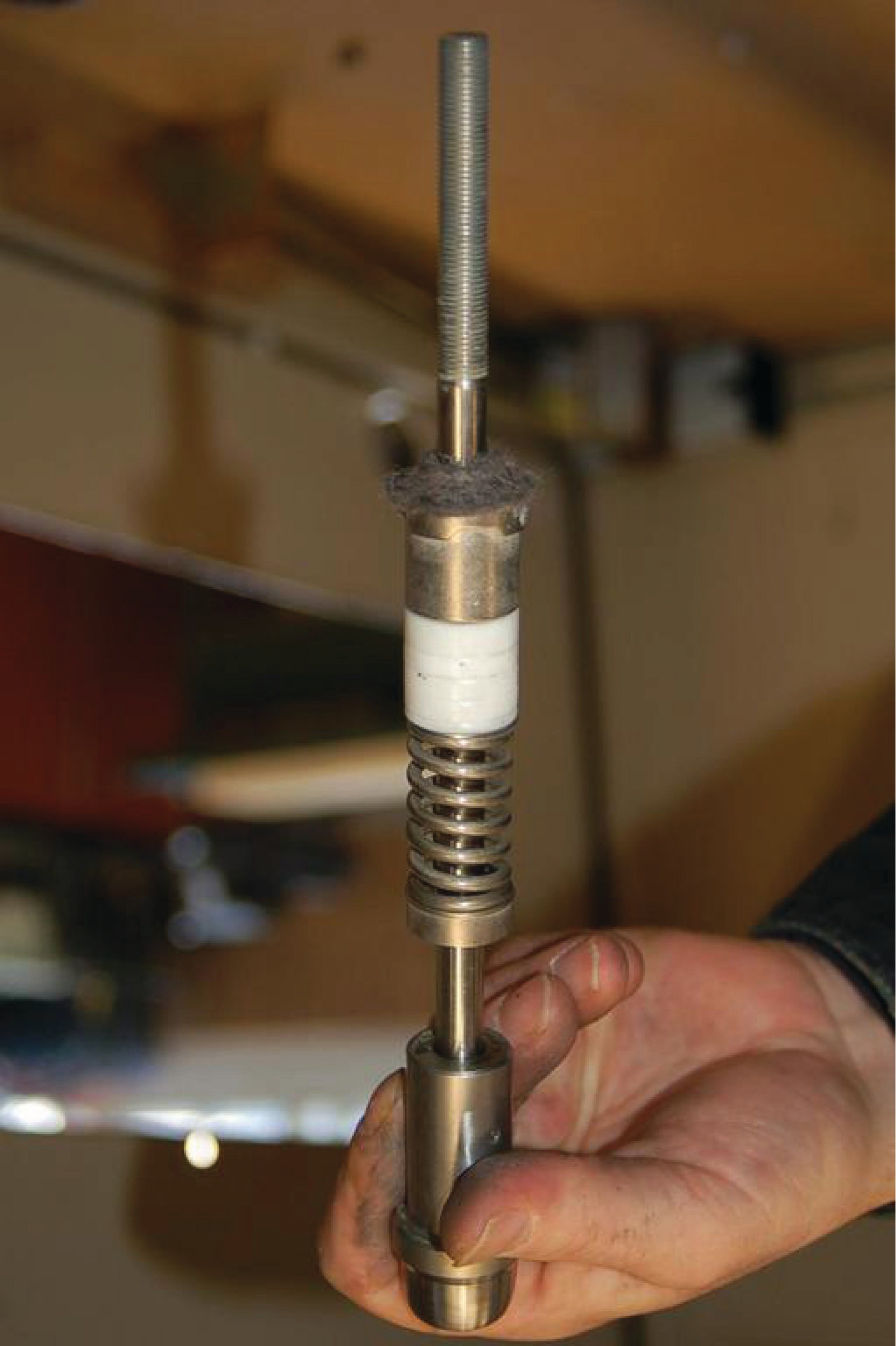 There is no lantern ring in this packing assembly, but there is a coil spring. This makes it a live-loaded packing as opposed to a jam packing.

In packing applications requiring external lubrication, a stem packing lubricator may be connected to the lubrication port on the bonnet. This device uses a long, threaded bolt as a piston to push a quantity grease into the packing assembly: 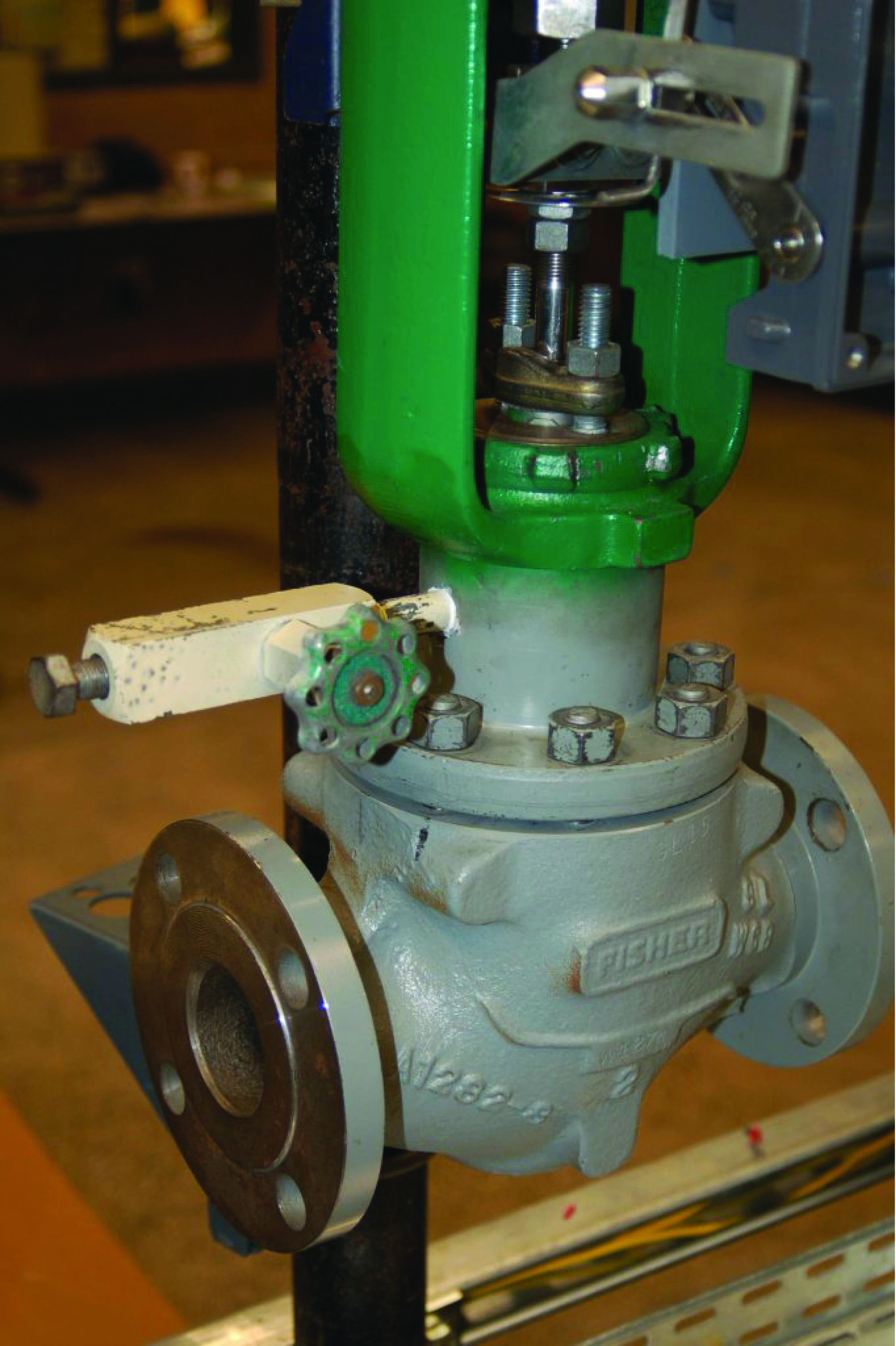 The two most common packing materials in use today are Teflon (PTFE) and graphite. Teflon is the better of the two with regard to fluid sealing, stem friction, and stem wear. Teflon is also quite resistant to attack from a wide variety of chemical substances. Unfortunately, it has a limited temperature range and cannot withstand intense nuclear radiation (making it unsuitable for use near reactors in nuclear power plants). Graphite is another self-lubricating packing material, and it has a far greater temperature range than Teflon as well as the ability to withstand harsh nuclear radiation but creates much more stem friction than Teflon. Graphite packing also has the unfortunate property of permitting galvanic corrosion between the stem and bonnet metals due to its electrical conductivity. Sacrificial zinc washers are sometimes added to graphic packing assemblies to help mitigate this corrosion, but this only postpones rather than prevents corrosive damage to the stem.

The following photographs show samples of woven graphite (left) and Teflon (right) “rope” packing, longer pieces of which would normally be found bent around valve stems to form seals. The graphite packing has a shiny finish and flakes easily, while the Teflon packing is plain white in color and maintains its integrity. Both feel slippery to the touch: 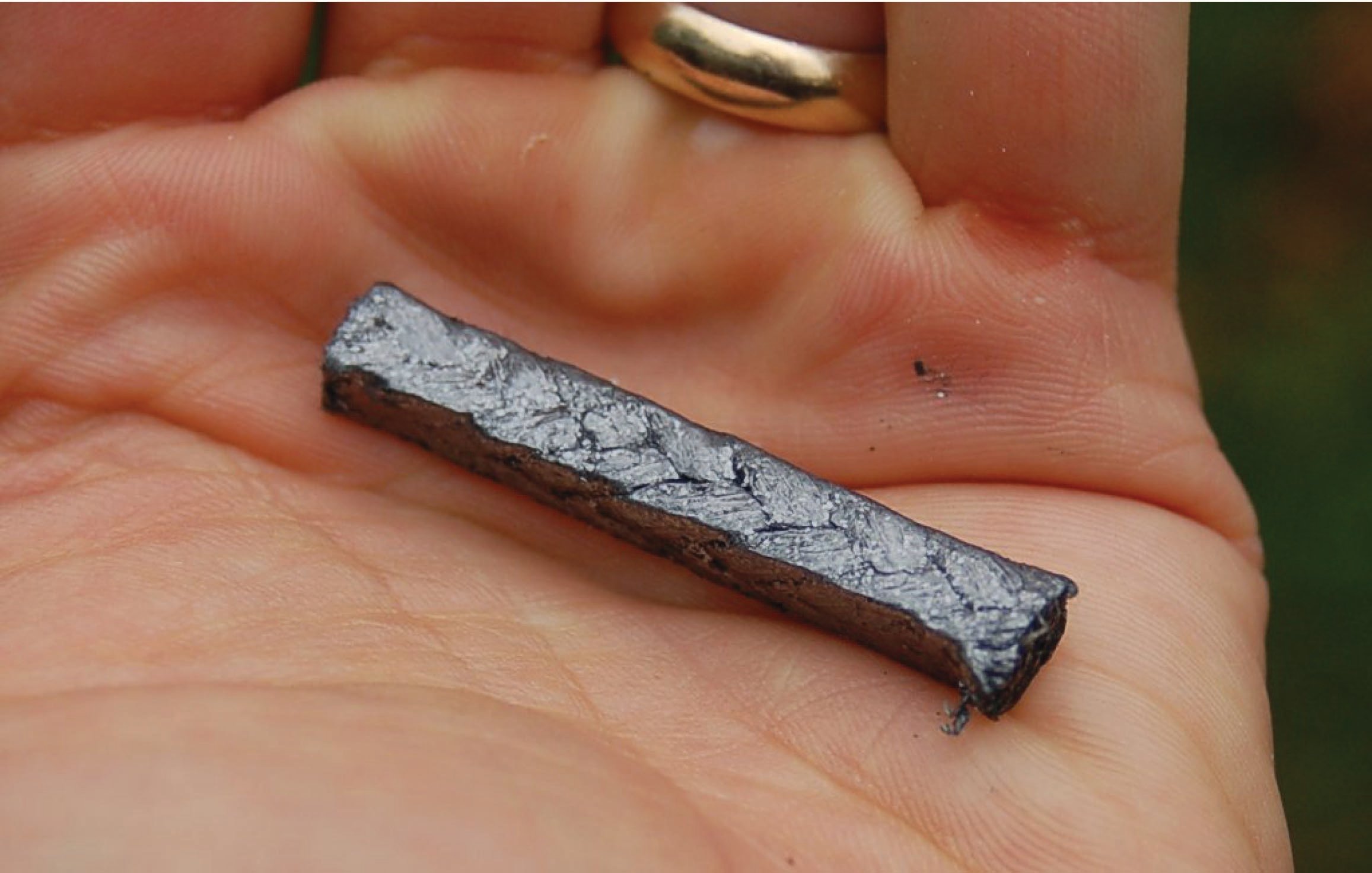 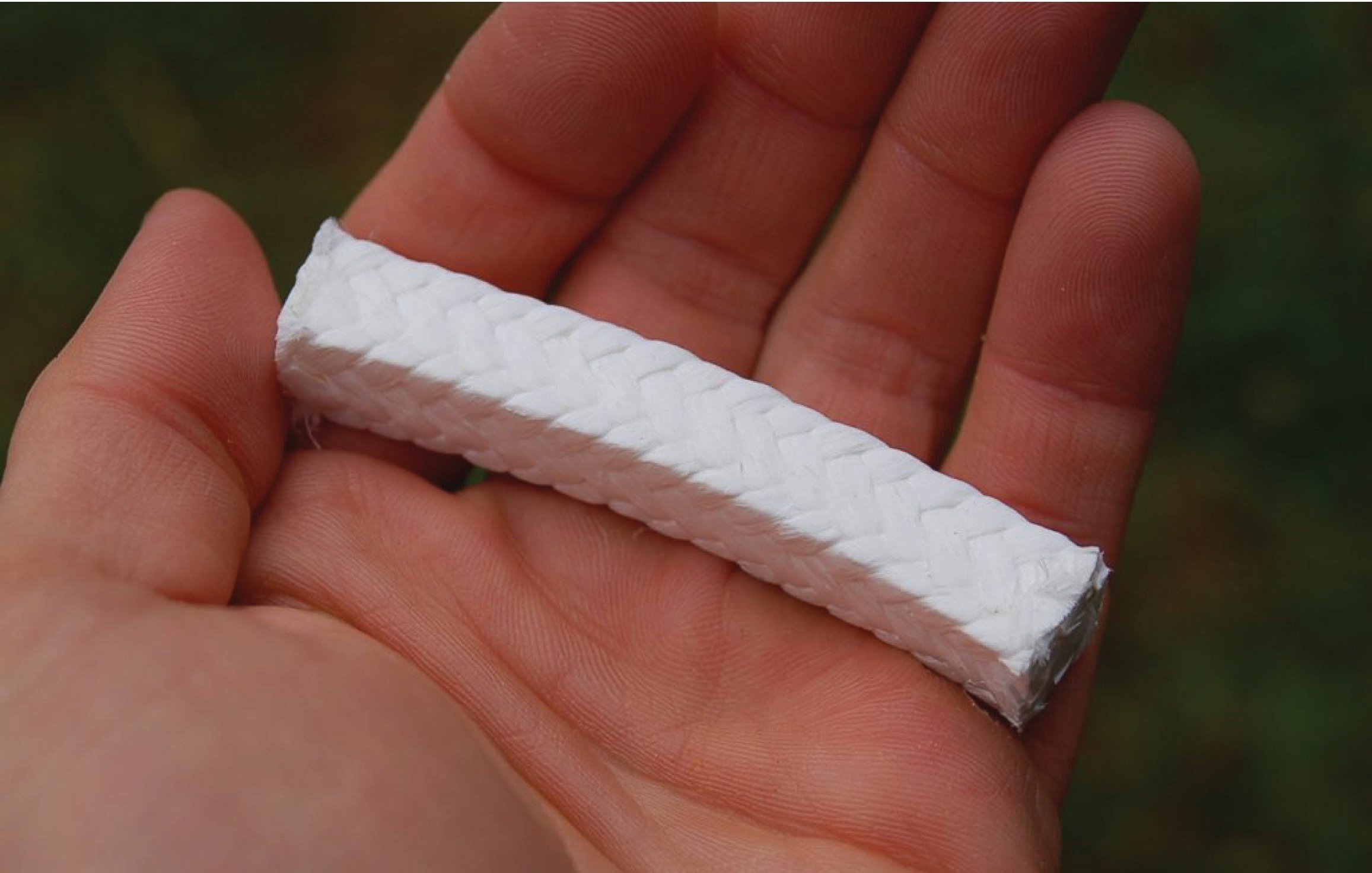 Hybrid packing materials, such as carbon-reinforced Teflon, have been developed in an attempt to combine the best characteristics of both materials.

A legacy valve packing material is asbestos, woven into packing rings much the same way as graphite fibers are woven into modern packing rings. Asbestos is a mineral, which made it suitable for high-temperature process applications. Its electrical non-conductivity eliminated the galvanic corrosion problem inherent to graphite. Unfortunately, its classification as a hazardous substance precludes its use as packing material for contemporary applications.

A completely different approach to packing is a device called a bellows seal: an accordion-like metal tube fastened to the valve stem and to the bonnet, forming a leak-proof seal with negligible friction. The accordion ribs give the bellows seal an ability to stretch and compress with a sliding stem’s linear motion. Since the bellows is an uninterrupted metal tube, there is no place at all for leaks to develop: 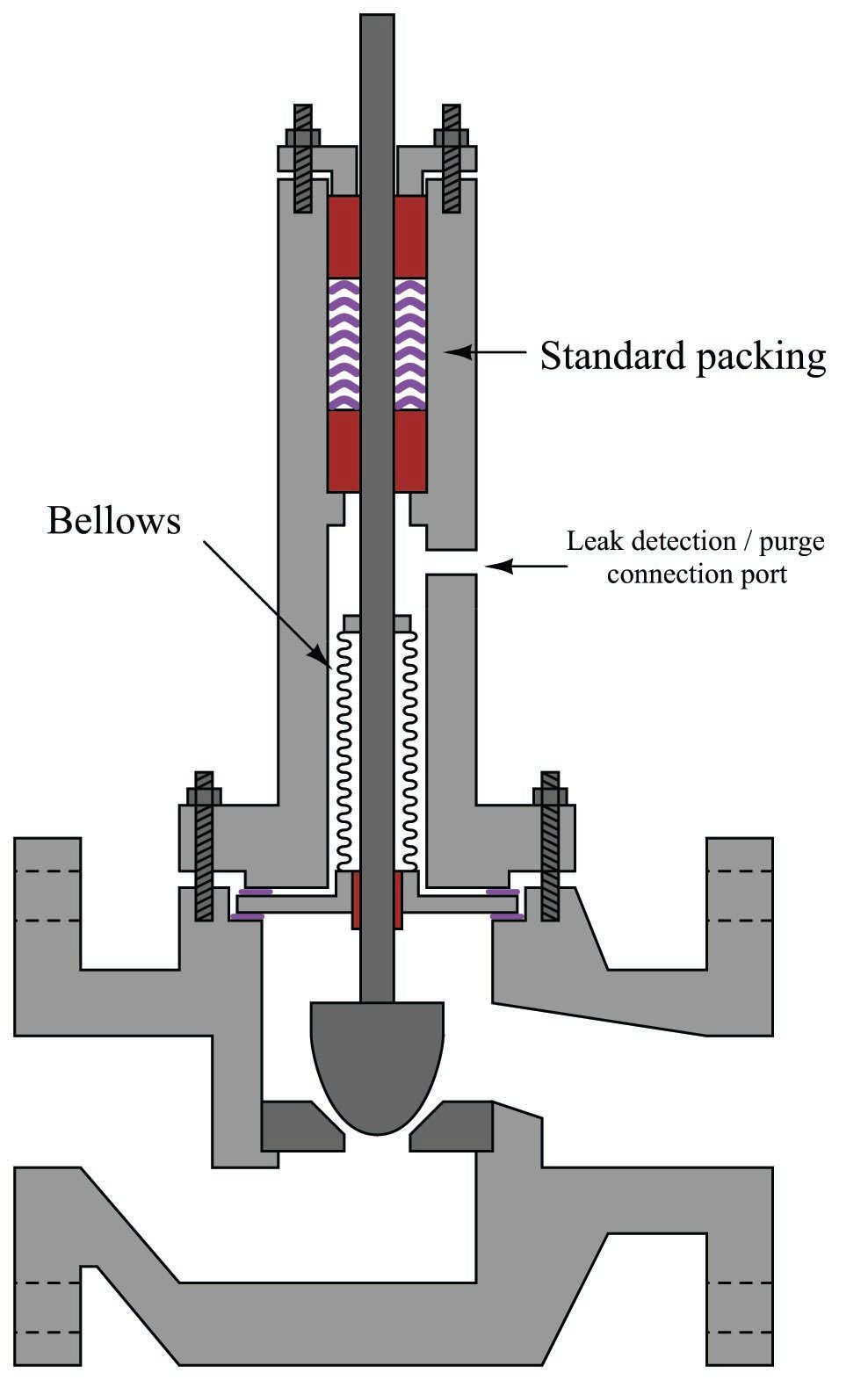 The port on the extended bonnet serves as a point of connection for process fluid leak detection sensors, to sound an alarm and/or take action in the event of ruptured bellows. The sensor may be as simple as a pressure switch, calibrated to “trip” at some modest pressure value below that of the normal process operating pressure. When the bellows seal breaks, the sensor will detect the leak and the standard packing assembly will maintain a reasonable seal until repairs are made on the valve.

An actual bellows seal unit appears in this photograph:

The accordion-shaped bellows is contained and protected inside the thick metal tube visible in this photograph. One end of the bellows is welded to the valve stem, and the other end is welded to the protective tube. With the wide flange of the tube firmly clamped in the bonnet of the valve, a leak-free seal exists.