CUI Devices is an electronics component manufacturer with manufacturing facilities in Asia. The founding company was started in 1989 in Portland, Oregon, and started with producing precision oscilloscopes. In 2019, a group of senior managers created a standalone company under the CUI Inc. family, known as CUI Devices. It has expanded its product range to include buzzers, microphones, cable assemblies, connectors, sensors, and switches.

Recently, CUI Devices released its newest range of pushbuttons called the MPB series. This series of switches come in various common form factors, including 9x6 mm and 5 mm profiles, multiple switching types (SPST and SPDT), and various pitches. The wide variations in the MPB range enables engineers a better switch choice while also being compatible with switches from other manufacturers. 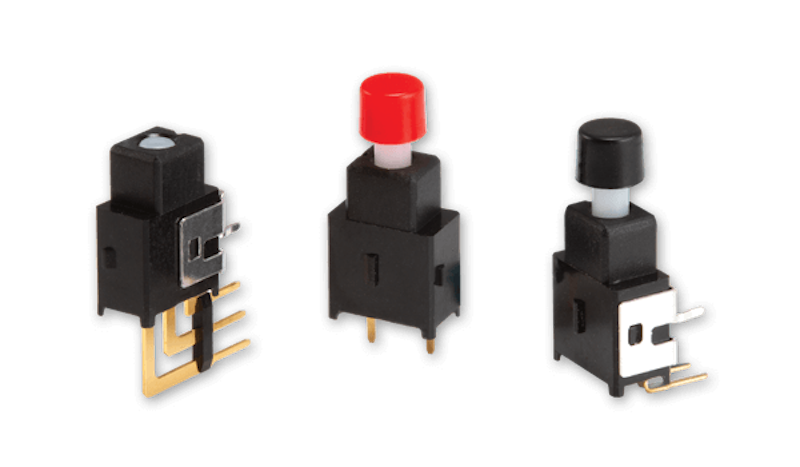 The switch range comes in both SMT and through-hole styles as well as right-angle and straight orientations. Further, the switches offer operating temperature ranges from -25 °C to +80 °C and mechanical cycles of 20,000 minimum. Each MPB family has its own design and specific characteristics, but the sharing of lifetime mechanical cycles and operating temperature helps to reduce challenges faced with component selection.

The MPB switches have an eight-week availability time depending on stock, and cost approximately $2.55 per switch when ordered in quantities of 500 through distribution channels.

The MPB family comes in six main categories, numbered MBP01 to MPB06, and each category has a unique construction style.

The MPB01 range are single pole switches with a 2.54 mm or 5.08 mm pitch. The switches also come with optional mounting pins for added mechanical security, an optional color cap, and are available in SPST or SPDT varieties. Furthermore, the maximum current rating of the MPB01 is 14 mA, the voltage rating is 28 VDC, and the switch has a maximum contact resistance of 50mΩ.

The MPB02 range includes all of the MPB01 features. However, the MPB02 also has a right-angle mounting position (whereas the MPM01 has a vertical mounting position). The MPB03 range is identical in electrical characteristics to the MPB02 and MPB01, but is a right-angled vertically standing switch with a bracket. Furthermore, the MPB03 is only available in an SPDT configuration.

The MPB04 range has the same electrical characteristics as the other switch ranges but is a double-pole switch instead of a single-pole switch. The double-pole means it also has a double throw action and is vertically standing. The MPB05 range is identical to the MPB04 range except that the switch is right-angle oriented, and the MPB06 range is a surface-mounted switch that is horizontally mounted.