FANUC introduced the M-1000iA, a floor-mounted 6-axis robot engineered to maneuver heavy payloads up to 1,000 kg (about 2,200 pounds) without sacrificing versatility and range of motion.

FANUC, a global leader in factory automation, CNC, and robotics, recently debuted its largest serial link industrial robot that combines a payload capability of up to 1,000 kg with a very wide range of motion: the M-1000iA.

Many manufacturers face challenges with processing heavy parts while maintaining the level of versatility needed for complex operations such as material removal or machine tending. However, the new FANUC M-1000iA aims to address these issues and more.

In addition, the wrist and J3 arm are IP67 rated, while the body is IP54 rated. This industrial robot also shares several parts in common with the FANUC M-2000iA, which can minimize the number of spare parts that must be kept in inventory. 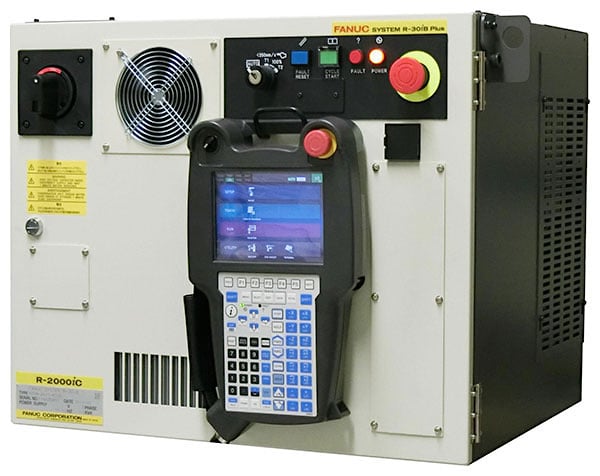 The M-1000iA uses an R-30iB controller based on the FANUC Series 30iB CNC Controller. Image used courtesy of FANUC

The M-1000iA is powered by the FANUC R-30iB cabinet controller, which includes FANUC’s  touch screen iPendant with 4D graphics providing live representation of toolpath tracking and robot cell interactions. The R-30iB controller is more energy-efficient, easier to troubleshoot, and simpler to use compared to older cabinet controller models from FANUC.

The ability of the M-1000iA to support and maneuver heavy payloads, even with large offsets from the wrist, is achieved through dual motors on the J2/J3 axis and a wrist engineered with extensive strength and stiffness. 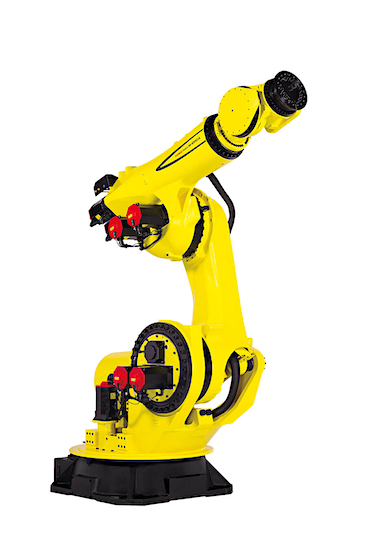 The extended reach, versatility, and wider ROM (range of motion) of the M-1000iA is because it uses a smooth serial-link mechanism as opposed to the more traditional parallel-link approach commonly implemented with heavy payload robotics.

Using a serial-link mechanism allows the arm to backflip and stand upright, which is simply not possible with parallel-link mechanisms. This is the largest serial link FANUC robot without interference with the J3 link. Note that this extended reach and wider ROM make it versatile.

The flexibility of this robot series sets it apart from the heavier-payload M-2000iA series from FANUC. Although the heavier series can lift over twice the payload with a greater reach, the limitation of the parallel-link allows the M-1000iA to work in applications unreachable by its heavier relative.

Industrial Applications for the FANUC M-1000iA

The FANUC M-1000iA was developed to meet the needs related to the automated handling of heavy payloads for tasks such as dispensing, machine tending, drilling, spot welding, material removal, material handling, or automotive manufacturing.

The FANUC M-1000iA can maximize production line efficiency and increase output for manufacturing facilities that work with heavy payloads. According to FANUC, the M-1000iA is expected to begin shipping in the first quarter of 2022.