Rugged Industrial PC From OnLogic is Designed for IIoT Applications

Rugged Industrial PC From OnLogic is Designed for IIoT Applications

OnLogic’s Industrial PC (IPC) has been designed with harsh environments in mind, yet is geared toward AI, IIoT, Industry 4.0, and other advanced manufacturing considerations.

At CES 2022, chipmaker Intel announced their 12th-generation Intel Core processors. Along with this announcement, OnLogic announced that they would incorporate these new processors in their Karbon 800 industrial PCs (IPCs). The Adler Lake i9 Intel processors can interface with advanced graphics processing units (GPUs) and communications protocols.

OnLogic has specialized in industrial hardware and computing solutions since 2003. They have over 70,000 customers in virtually all manufacturing industries, including rugged environments. Its computers are designed to be highly configurable and forward-thinking, contributing to the internet of things (IoT) and industrial IoT (IIoT) systems.

The Karbon 800 is the newest IPC developed by OnLogic. Its ruggedized computers can interface with numerous devices, occupying a relatively small footprint on the factory floor. They have built-in heat-sinks, multiple ports for interfacing, and quick processing. Fanless and hybrid models mean fewer moving parts and vibration, increasing the mean time between failures (MTBF).

The Karbon 800 series is the latest model in the Karbon series. At the heart of the Karbon 800 is the Intel i9 Adler Lake processor, which has several distinct advantages over the previous models. They can be configured with 16 cores and up to 64 GB of DDR4 error-correcting code (ECC) or non-ECC memory, making it stable and quick.

Compared to the Comet Lake processors found in the previous model, they are 1.35x faster for single-thread performance, and nearly twice as fast in graphics performance. Solid-state drives (SSDs), which are hot-swappable, handle permanent data storage and programming.

In terms of communication, the Karbon 800 series can have up to 14 ethernet ports, Wi-Fi 6E, Bluetooth, ModBay, and 4G LTE support. Depending on the model, they can have one or two PCIe slots. This makes it versatile, meaning it can use a myriad of sensors and actuators. The system can use dual displays, meaning more intuitive operating interfaces can be created, improving safety and operability in virtually any character.

The four basic models—801, 802, 803, and 804—have varying degrees of capability. Listed from smallest to largest, the 801 is the most compact, built for small spaces, and the 804 has the largest footprint and the most PCIe slots.

Though it’s unclear if this IPC holds an IP rating, the company touts the IPCs are built for harsh environments, resistant to damage due to dust, vibration, and extreme temperatures. 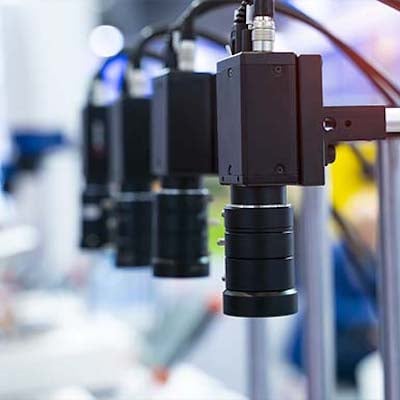 Among its applications is AI for vision systems. Image used courtesy of OnLogic

Due to its plethora of inputs and outputs, the Karbon 800 series may be suited for legacy or modern interfaces, or helping the two communicate while upgrading your control system. Additionally, it can run deep learning algorithms for image processing or other vision systems.

The Karbon 800 series IPCs offer numerous improvements over previous Karbon lines, thanks in part to the Intel Adler Lake i9 Processor. All models come equipped to deal with the challenges of a harsh, industrial environment, with processing capabilities that can handle advanced graphics, communication protocols, AI, and the ever-expanding technologies associated with IIoT.