How to Control Robotic Transfer Systems with Laser Distance Sensors

How to Control Robotic Transfer Systems with Laser Distance Sensors

These sensors can be extremely accurate at telling distance, which opens them up to many different types of control. However, it should be noted that certain safety features should be programmed into the system to ensure any laser failure is safely dealt with.

To understand T-cart control, it is important to understand what exactly a T-cart operation consists of. A T-cart is an electronically controlled cart, often on metal tracks, that sorts and moves pallets in an automated palletizing operation. These carts move pallets in a warehouse environment. They commonly take the pallets from a set of loading conveyors to the next step in the palletizing process—often a shrink wrapping station. 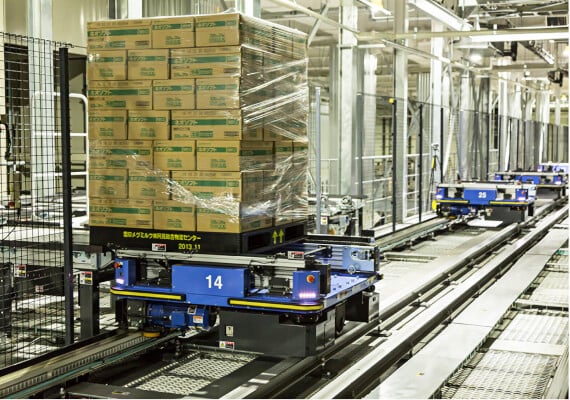 T-carts use a programmable logic controller (PLC) or robot to control movements and act as the “brains” behind cart operations. A PLC can use different inputs to interpret when and where to take the different loaded or unloaded pallets. The PLC needs feedback from the T-cart itself to understand its location in its many different path combinations.

There is a multitude of different ways to provide location data from a T-cart to the PLC or robotic system controlling it. An outdated but common practice is to use limit switches to relay cart location. While limit switches work quite well in relaying the appropriate information to the controlling unit, they have certain pitfalls more easily managed with modern sensing technology. Limit switches also require more extensive programming than other sensor types because they relay less information at any given time. 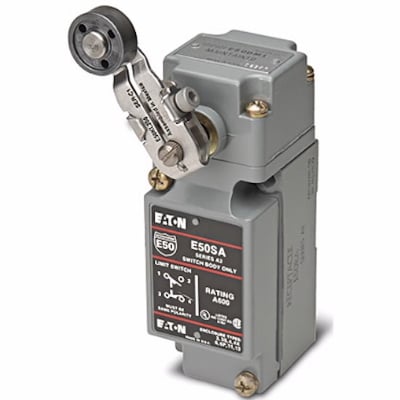 While limit switches will work for a T-cart system, they have weaknesses that other more modern sensors do not. For starters, they are an electrical/mechanical unit. Several factors can affect their performance since they rely on both electrical and mechanical inputs to function properly. For all practical purposes, any electrical problems developed in a limit switch can also develop in any other electrical sensing unit, so they will not be considered in this case.

Since limit switches involve physical interaction with their environment for proper function, they can be affected more easily than sensors relying solely on electrical-based sensing. Physical wear can be a determining factor in their performance. Over time, the switch may wear and slowly start to change how it operates, causing issues within the cell. Since the changes are subtle, they may go unnoticed until a catastrophic failure occurs. Lastly, they can also be negatively affected when an external force moves or pushes them out of their proper position.

The laser is sent out from the sensor to an object, then reflected off the object, and the sensor receives the reflected light. It uses the time taken from when the beam was sent until it was received back again to tell how far the object in question is, known as a time-of-flight sensor.

Laser distance sensors can provide an analog or digital signal back to the control unit. This signal can then be used as a continuous input for the control logic when making decisions for the T-cart’s movement. The laser can then relay a range of values based on the T-cart’s position during its travel time. The PLC logic can then take the raw data and make decisions based on the cart’s current location and where it needs to travel next.

Technically, a T-cart can be controlled with a single laser distance sensor shooting parallel to the tracks. The sensor can be located on a stationary stand looking at the cart itself or mounted on the cart and move along the path with the cart looking at a stationary object.

Mounting choices should reflect the easiest possible wiring route. A single sensor can relay enough information to control the cart, providing a range of numbers; for example, 0–10000 mm on a 10 m track. While this setup technically works, it leaves open the possibility for unnoticed failures within the system. If something falls in the path of the laser, it will suddenly read a much smaller number, and the PLC might think it is in a different position than it truly is.

Appropriate use of laser sensors in the scenario described previously is to use two sensors, either pointed in opposing directions on the T-cart or from opposite ends of the track if they will be mounted off the T-cart’s body. This setup provides redundancy to the system, and the PLC receives enough information to detect many different faults within the system. 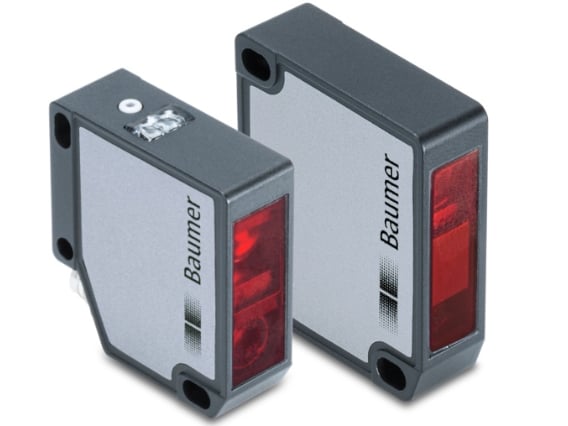 With two lasers, the PLC or control unit will receive two separate data feeds. These data feeds should theoretically be within a certain range of each other. If the data received goes outside the given range, the PLC recognizes something has happened within the cell. Either something has fallen in the path of the T-cart, or the laser is giving faulty information.

A system involving two lasers also has the added benefit of checking any sporadic data from the sensors. If one sensor “jumps” in its location, but the other does not, the PLC can be programmed to send an alarm to the system.

Lasers can help control multiple T-carts on the same track as well. If each cart has two lasers, their distances are known and used for multiple cart control. The same fault processes apply to this system, similar to a single T-cart system.

Laser distance sensors are an easy way to retrofit old T-cart systems that traditionally run with limit switches. They can be easily mounted to the cart or near the track to provide vital information to the PLC. New robotic and automated cells can also benefit from them as a simpler way of sensing for the control unit. Use two sensors to create redundancy and stop faults in case of errors or fallen products in the lanes.