Life on the Farm: Cleaning Stalls, Milking Cows, and… Robots?

Life on the Farm: Cleaning Stalls, Milking Cows, and… Robots?

Learn how one small farm in a rural community is upgrading production with advanced technology in several ways to overcome staff shortages, product demand, and regulatory compliance.

A few weeks ago, I was able to attend the grand re-opening of a small family farm in rural southwest Washington State where a new era of technology implementation was being showcased to the community. 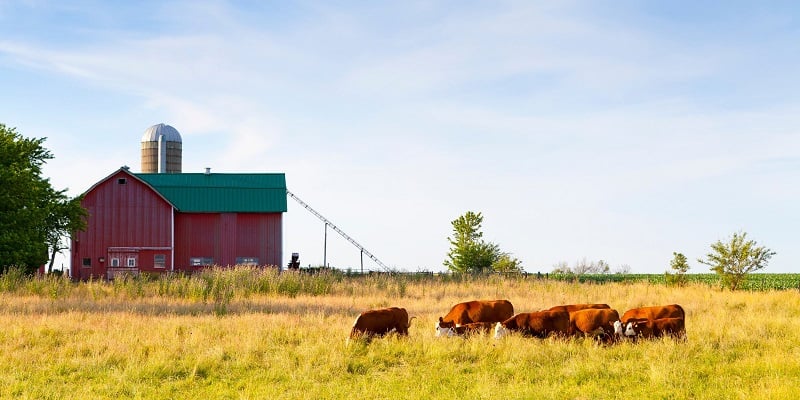 Figure 1. Small farms raise animals and crops, sometimes commercially, which can be a real challenge in modern times without automation of some kind. Image used courtesy of Canva

The drive up to Sun-Ton Farm did not outwardly exhibit any extraordinary characteristics. A long gravel driveway led to a brown wooden barn with visitor parking in the adjacent field. Equipment parked near the barn included many normal commercial tractor implements, and the sounds of cows grazing in a far field could be heard over the voices of the guests.

The impressive new additions to the farm operations were not outside, but rather inside one of the covered buildings. A long concrete hallway with cattle feeding stanchions on either side and the typical smell of a cattle barn was filled with curious visitors. A sheet metal milking parlor stood on either side of the hallway, with doors wide open to allow a view of the operation inside.

Inside each milking parlor were two stalls into which feed was distributed periodically, encouraging a cow to walk up onto a metal rack. As a cow walked onto the metal rack, a small gate automatically closed behind it, and as it stood eating happily, a laser-guided washing brush cleaned the udders and placed a suction device with incredible precision. Having grown up on a small farm, the process of milking cows is not foreign, but watching an electromechanical system handle the task 24 hours a day was very impressive. 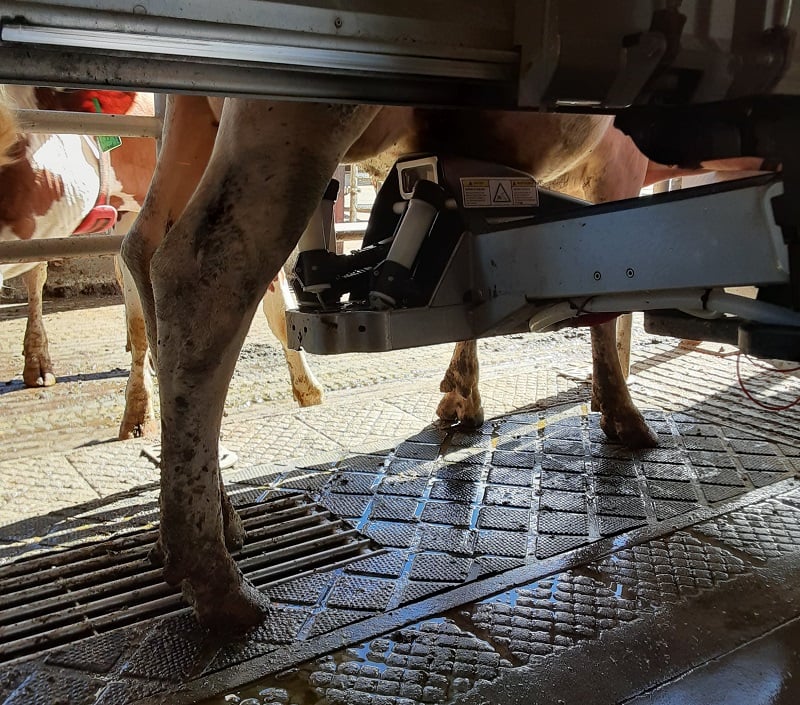 Figure 2. Laser vision and guidance is used to clean and place the apparatus to avoid any contaminants. Author’s image

A fully automated milking storage and HMI control process station stood beside each of the milk stations. In gracious acceptance of my request, Michelle and Lonny Schilter (the farm owners) opened the cabinet to show me the inner workings of the control station, and it was every bit as advanced as the most highly automated control cabinet I have seen inside any manufacturing facility. 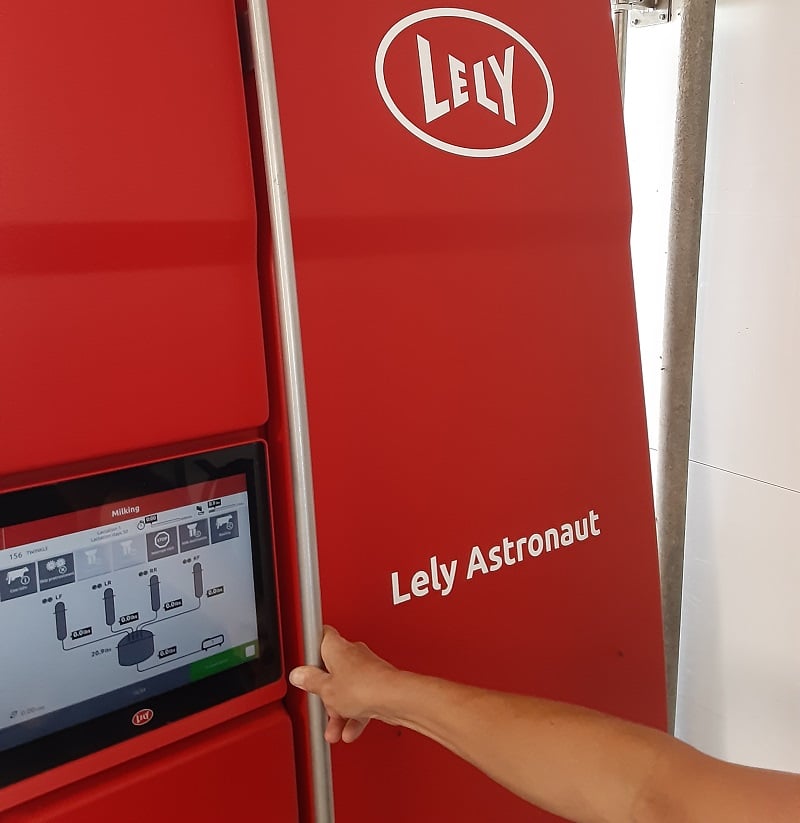 It’s not enough to simply pump milk and hold it in a jar until a truck arrives to haul the milk to a processing facility. The milk must be stored in food-grade sealed containers as shown in Figure 4.

Additionally, if any anomaly is detected, such as contaminants or a portion of the milk sitting outside of refrigeration for too long, the milk must be disposed of as per USDA and other applicable regulations. However, it would be a waste to dispose of more than necessary, so an intermediate container stores milk temporarily until it passes all inspections and then moves to the bulk refrigerated storage. 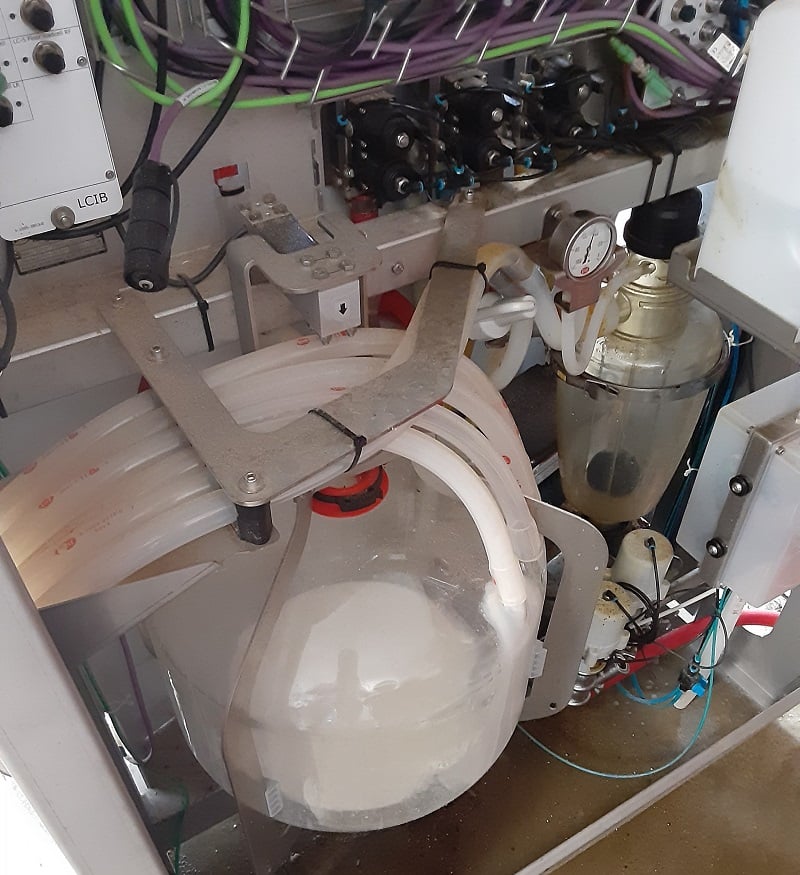 The process uses a combination of pneumatic and electrical controls, similar to many industrial processes. As may be expected, air filtration, valves, and actuators are used along many steps of the process, from the fluid control to the placement of the milking apparatus. 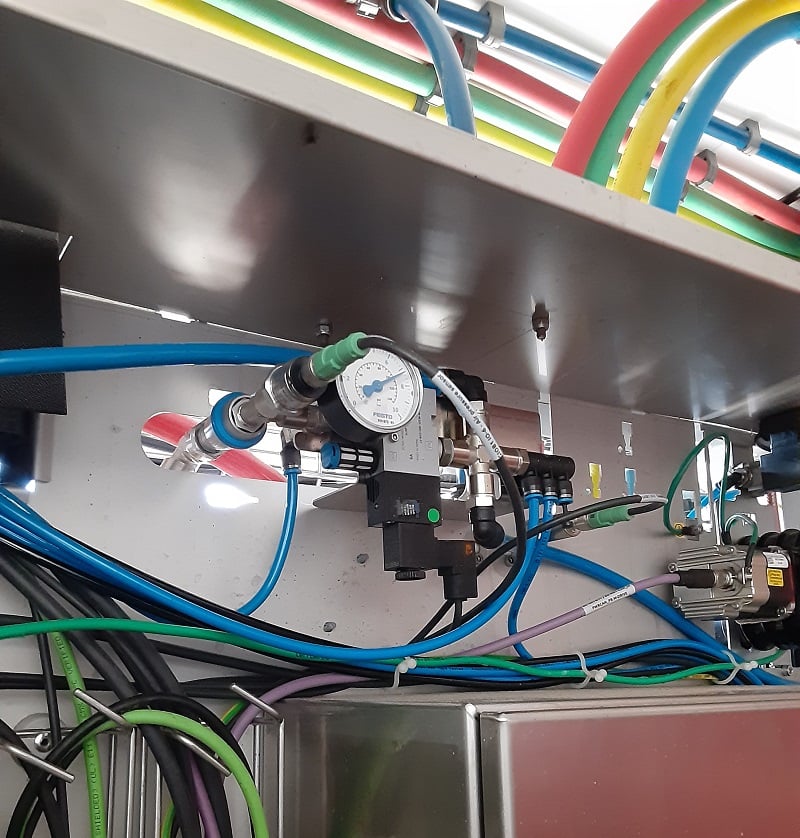 The electrical system is also characteristic of any typical industrial control. Circuit breakers control the various branch circuits, which distribute power to the AC and DC control systems and load devices. The CPU is a dedicated controller, rather than a PLC or other modular control system, but nearly all aspects are immediately recognizable for any seasoned control system veteran. 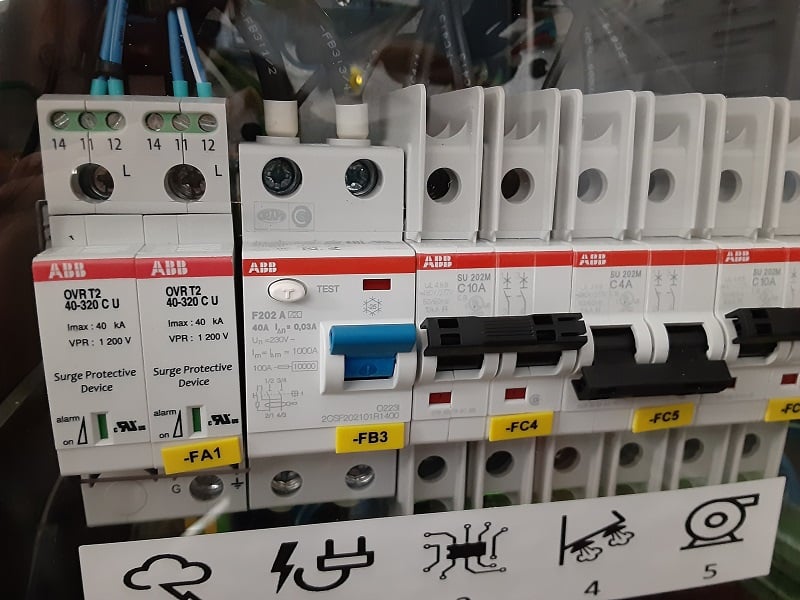 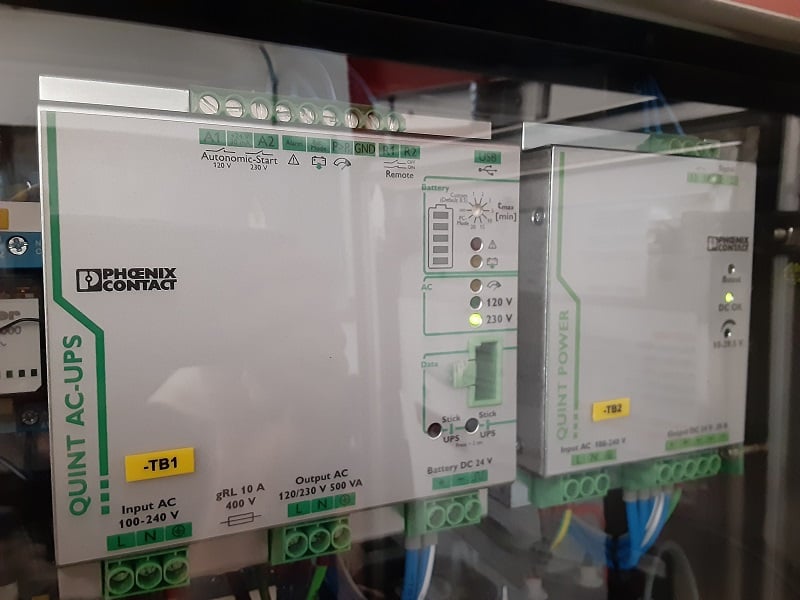 The milking machines in this facility are not standalone devices. Although each control system monitors its own milk production, the collective data is transmitted to a central computer that feeds the data into a cloud storage and analysis engine. This data transmission requires standard industrial network protocols using IP rated communication cables, as shown in Figure 8. 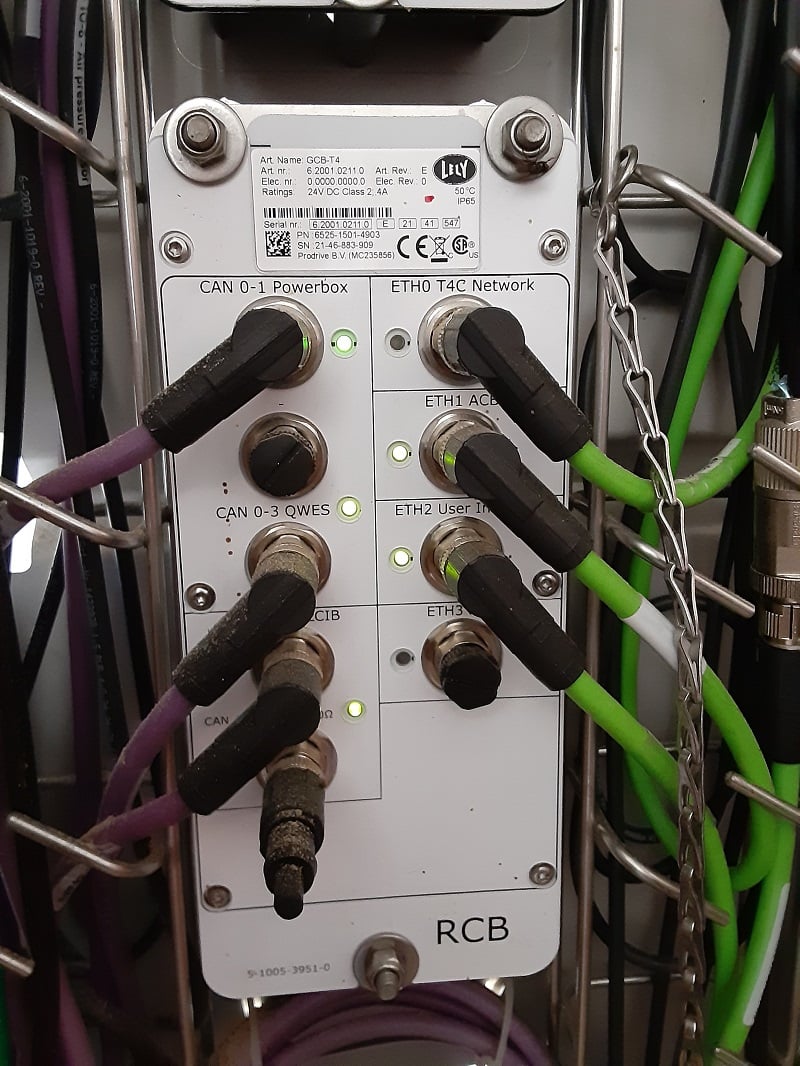 Figure 8. Communication network adapter hub, in this case, CAN to Ethernet. Author’s image

With the data safely stored in a cloud server, it can be accessed both locally and remotely. An on-board HMI displays data for every milking session, showing the status of the current cow, milk volume, past production trends, and diagnosis of any problems, along with the ability to recall data from past sessions. Additionally, alerts and warnings are sent to the farmer’s smartphone via an app to correct serious issues at any time of the day or night. 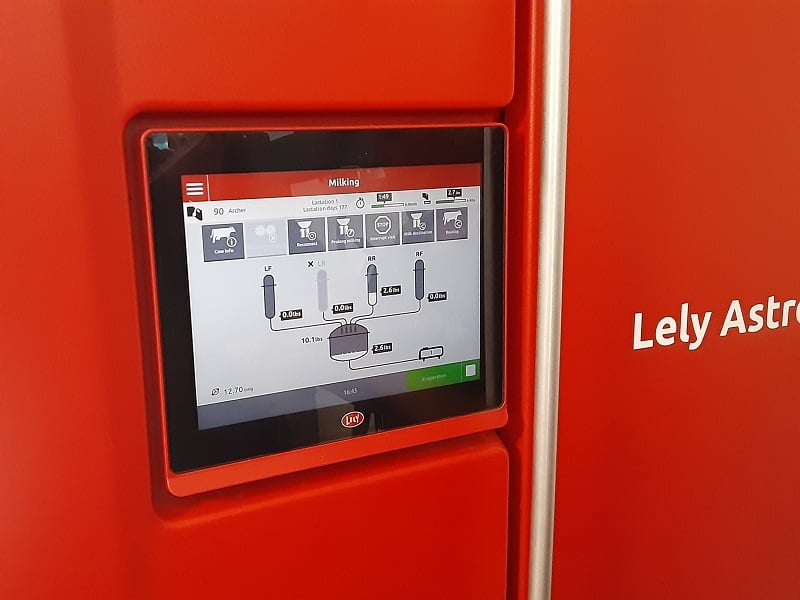 Figure 9. Process monitoring and control with the HMI screen on the front of the milk control station. Author’s image

Each cow also wears an embedded RFID tag, just like those used for returning pets safely if they wander from home. The tag communicates with the milk control station to observe milk quantity and quality and can also track the time between milkings for each unique cow. This helps the farmer to identify which cows may require some extra ‘guidance’ into the milk parlor, or if they are experiencing health problems and are stranded in a field.

It would certainly be impressive enough if this milking parlor was the only implementation of automation at the farm. But to be truly ‘robotic’, a farm must have actual robots.

The actual robot at this farm affectionately goes by the name Wall-E, and its job is to clean up after the messy-eating cows. The feed (hay and grain) is laid down along the edges of the central hallway, as seen in the upper right corner of Figure 10. As the cows eat, they inevitably push much of the hay out into the middle of the hallway beyond the reach of their mouth.

Wall-E’s task is to patrol the hallway, pushing the valuable feed back into reach of the hungry cows, greatly reducing waste and extra cleanup. 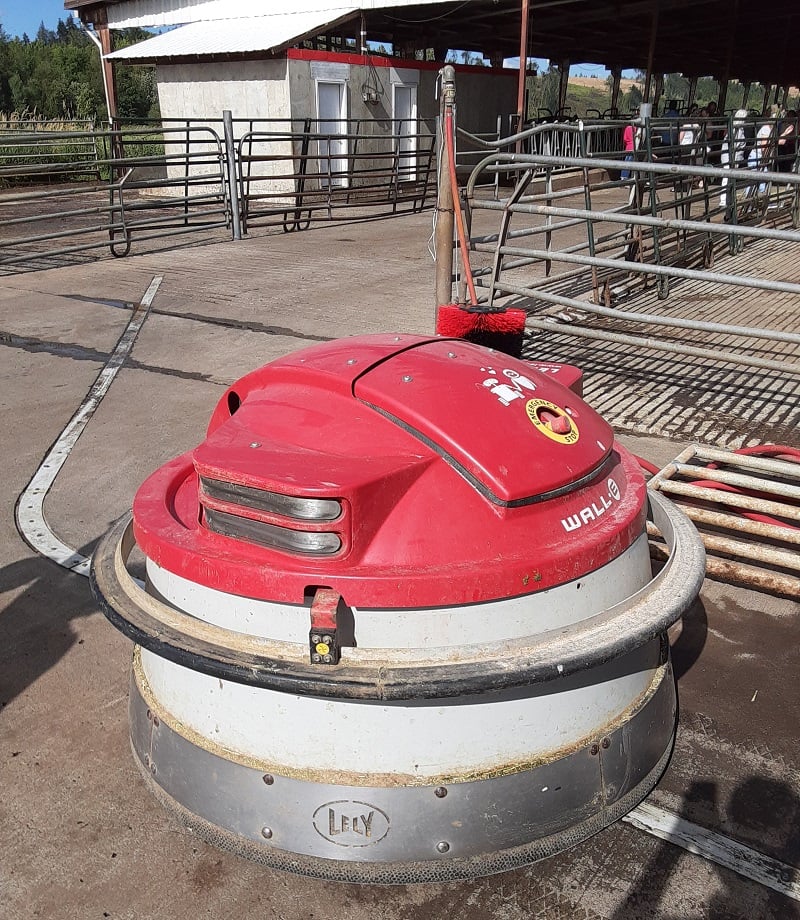 Much of Wall-E’s motion is controlled by the metal guidance track and a pre-programmed path, but basic proximity sensors allow interaction and safe navigation around people and animals—perfect for an open house demonstration!

Different industries have stereotypes, and that will always be the reality. A dairy farm will never cease to have very different sights, smells, and challenges than many other industrial facilities.

Regardless of the working environment, one thing is the same: technology can be leveraged with the right tools and techniques to increase efficiency, reduce waste, compensate for challenges in staffing, and bring a new energy of excitement to tasks which are so very important to the everyday life of you and me.

There’s something to think about the next time you browse the dairy aisle at the store.