Check out the previous Arduino OpenPLC article, including installation and setup instructions:

In our previous article, we provided an introduction to OpenPLC as a hands-on project, converting an Arduino Uno into an entry-level PLC. This illustrated the ease of building a low-cost functional automation controller with the popular microchip ATMEGA328 microcontroller-based electronics prototyping platform. In this article, we will provide information on wiring and testing a control station for the OpenPLC Arduino platform to construct a start-stop control circuit.

In industrial controls, there is a fundamental approach to allowing operators to engage with automation machine systems: the start-stop control circuit. The start-stop control circuit allows a hands-free approach to starting an automated machine or process by pressing a pushbutton switch. The pushbutton switch is only a momentary operation where the operator releases the switch after pressing it.

The parallel wired CR’s NO contact will provide an electrical current that will maintains a sealed pathway around the start pushbutton switch once it is released and returned to open. The CR’s second NO contact wire on the second rung of the control circuit will close, thus turning on the electrical load, here a pilot lamp (PL), is wired to it. To turn off the PL electrical load, press the stop pushbutton switch. Figure 1 illustrates this start-stop relay ladder control circuit. 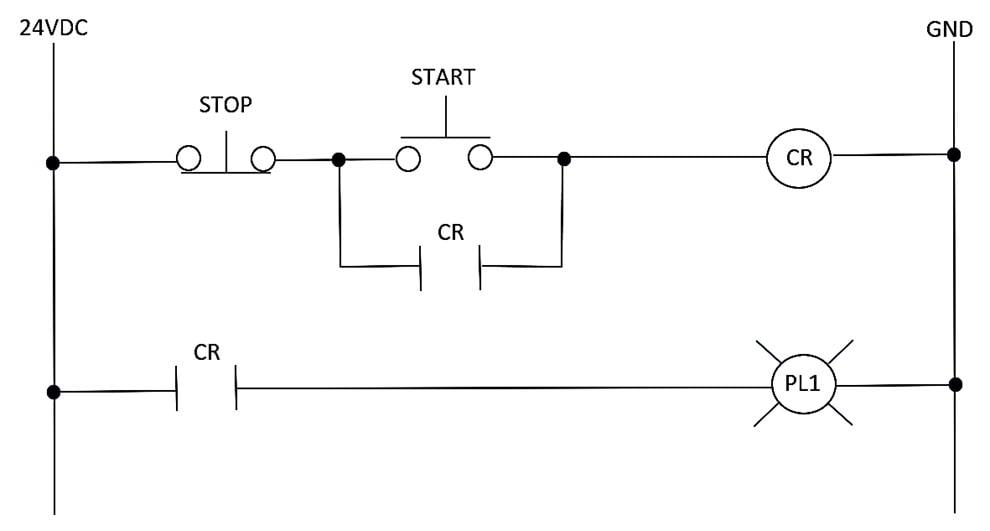 The start-stop control station circuit shown in Figure 1 will aid in the development of an OpenPLC automation concept. The developmental aspect of the design concept is to wire an industrial up-down switch box to the Arduino PLC. The switch box will perform the pushbutton switch operation as shown in Figure 1. A press and release of the ‘up’ switch will operate as the start switch, thus allowing the Arduino’s digital pin 7 to turn on an LED. Pressing the ‘down’ switch will turn off the LED. The control station concept block diagram is shown in Figure 2. The electrical behavior of the control station pushbutton switches will be managed using an OpenPLC ladder diagram (LD) program. 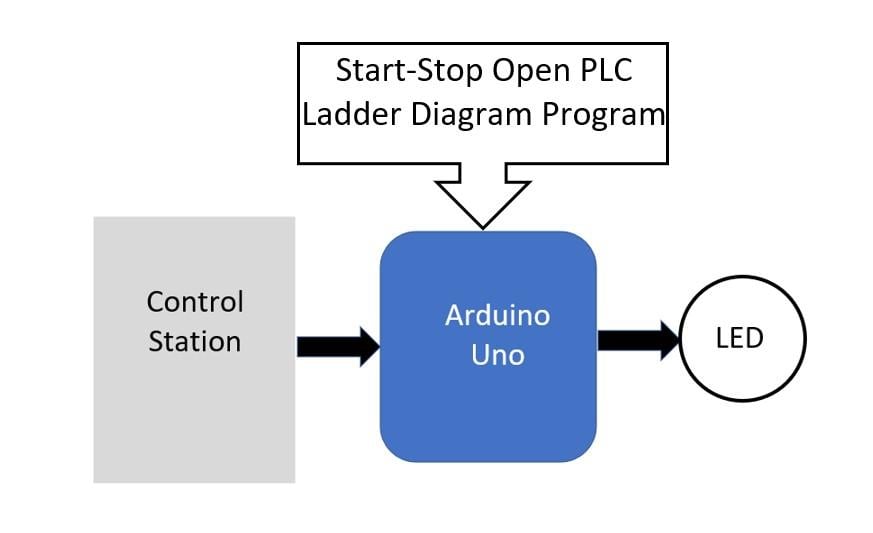 Figure 2. The control station concept represented as a block diagram 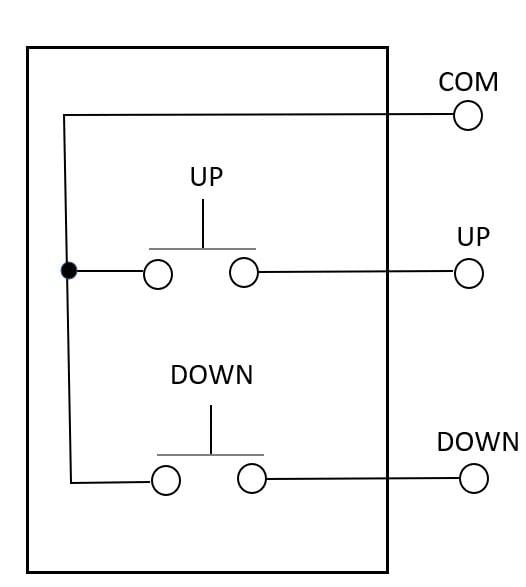 This project can also be accomplished by using two normally open pushbuttons, etiher tactile breadboard or industrial size. For this tutorial, the metal enclosed switch box will be demonstrated.

The wiring to the switch box is quite easy to accomplish.

By removing the top and bottom fasteners, the switch box cover is removed. Push the top metal knockout of the box so that three electrical wires may pass through it. Be sure to sand the metal knockout edges to prevent cutting the insulation from the wires.

With the removal of the cover, the terminal block for attaching electrical wires can be achieved. Dupont or 26 AWG solid wire is attached to the three terminal screws. The shorting bar provides a common point for switching either high side voltage or ground. For the Arduino PLC, +5 VDC will be wired to the shorting bar, thus switching high-side control voltage signals to digital pins 2 and 3. Figures 4 and 5 show the cover removed and electrical wires attached to the control station switch box. 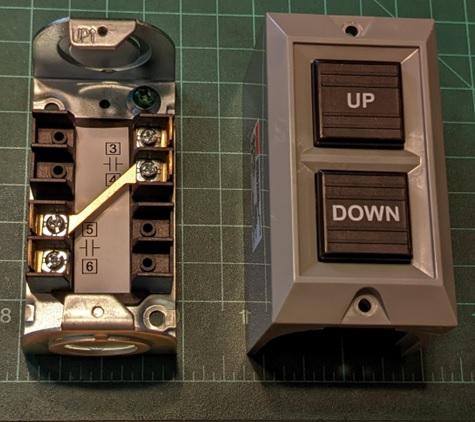 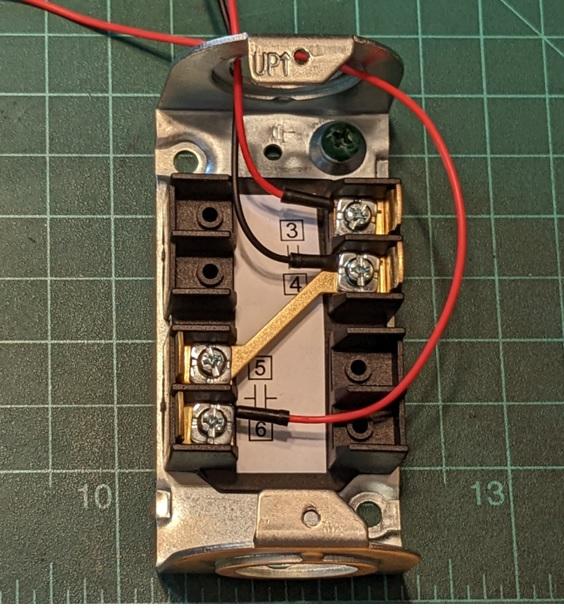 Figure 6. Performing a continuity test of the attached wires to the pushbutton switches

Congratulations, you have a functional control station switch box to wired to your Arduino PLC! Add labels to the three attached electrical wires for identifying the two switches and the COM. Secure the cover with two removed fasteners. The next step of the OpenPLC project is wiring the switch box to the Arduino.

Wiring the Switch Box to the Arduino PLC

The next in the project is to wire the control station switch box to the Arduino. The COM wire will be wired to the +5 VDC rail of the solderless breadboard. This breadboard will also be used to contain the two tactile switches that will operate the program if you do not have an enclosed switch box.

If you do not have an enclosed switch box:

Simply omit the COM, ‘DOWN_STOP’ and ‘UP_START’ wires from the diagram in Figure 7, allowing PB1 and PB2 to operate the system alone.

With the switch box wired to the Arduino PLC, an electrical test can be performed.

Place a digital voltmeter across the R1 10 KΩ pulldown resistor. Power the Arduino by attaching a 9 V battery to the barrel connector (A USB or AC power supply will work as well). The green ‘ON’ LED will be active. Press and hold the ‘up’ switch to read approximately +5 VDC. Attach the digital voltmeter across resistor R2 and perform the same voltage measurement test using the ‘down’ switch. If a reading of approximately +5 VDC was not measured, ensure the digital voltmeter is electrically connected across the pulldown resistors. Repeat the test to ensure correct control voltage signals are being applied to digital pins 2 and 3 of the Arduino. The next part of the OpenPLC project is to build the LD program. 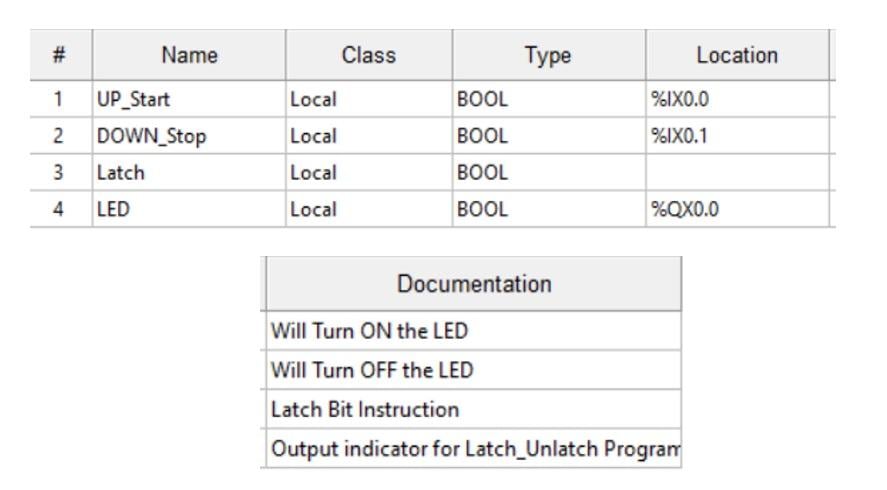 Using the tag listing table, the start-stop LD program can be built using Figure 9. To ensure the LD program will work properly, note the negated bit instruction used with the DOWN_Stop tag. 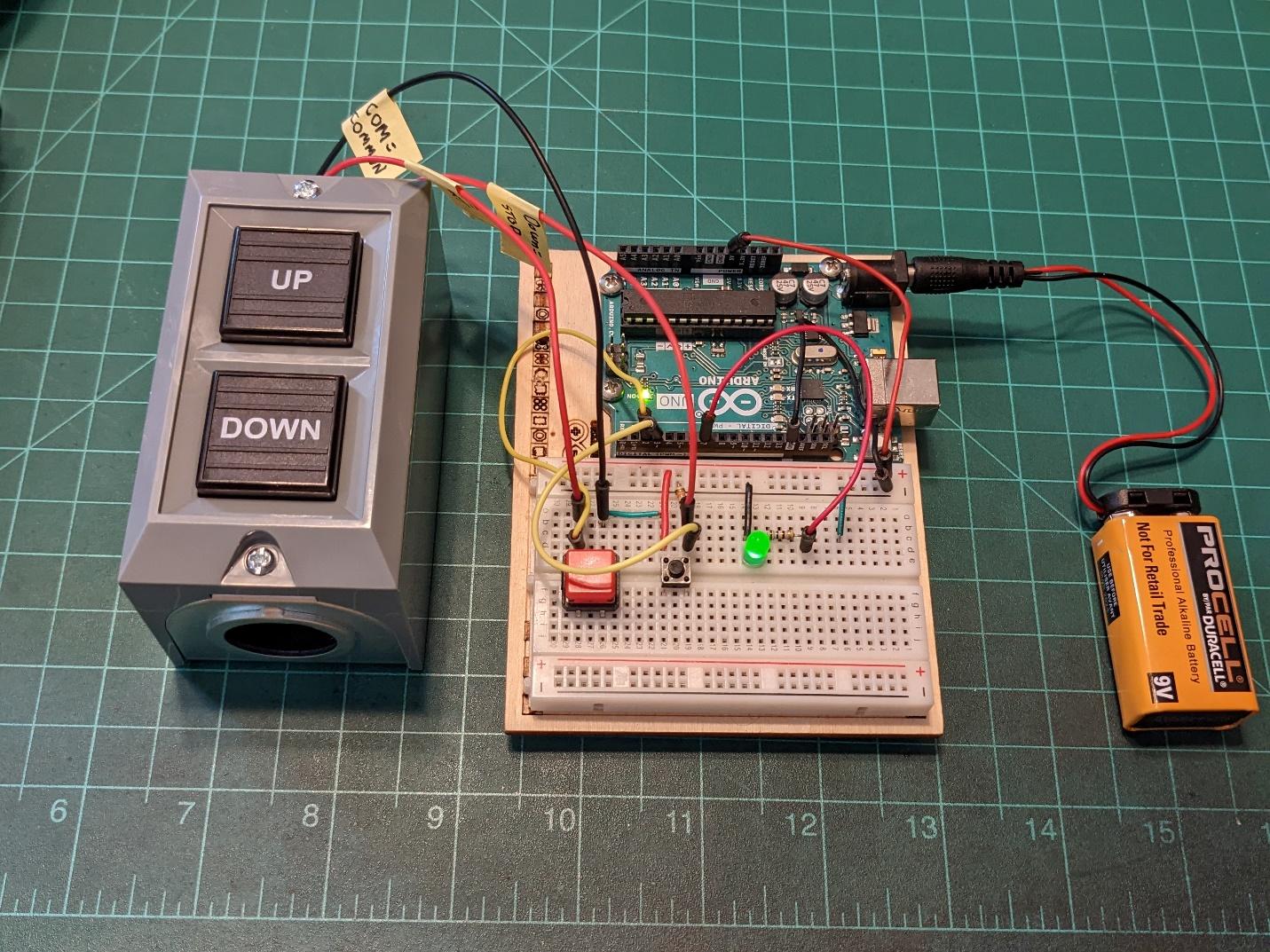 The following video clip will illustrate the final operation of this OpenPLC project build. The next OpenPLC project installment will explore using an all-inclusive project kit with pre-mounted electronic components to a PCB assembly to construct a transistor relay DC motor controller. The project kit will allow rapid development and enhancement of OpenPLC LD programs for the Arduino PLC!

Using the control station switch box, create a logic OR gate function. Upon pressing either switch, the LED will turn on. The solution will be provided in the next OpenPLC project article!