Many worldwide plants are still running the old Advant Controller 450 from ABB in their facility, with many plants using the latest System 800xA DCS interfaced with the existing AC450 controller. 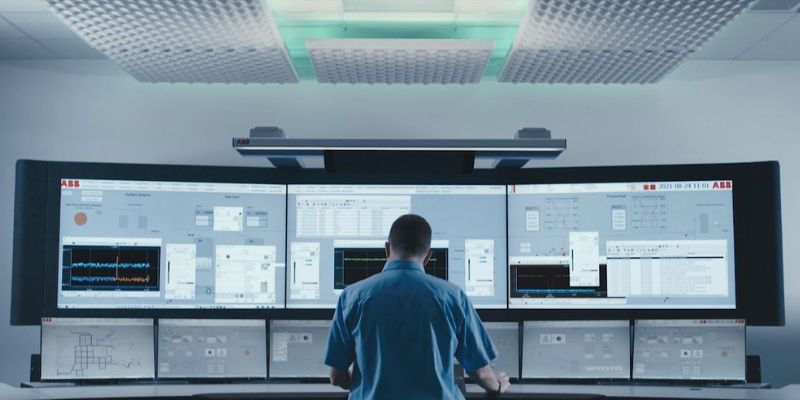 Figure 1. A distributed control system is an organized hierarchy of controllers that monitor and control processes in power plants. Image used courtesy of ABB

What is a Distributed Control System?

A distributed control system (DCS) is an industrial control system that comprises field sensors, transducers, controllers, servers, and operator workstations for local/remote control and for overall monitoring and operations of the power plant at the control center level. The DCS follows the distributed structure where all the related equipment is distributed across the plant with respect to data acquisition, function, and control.

Basically in a DCS, a large process is being controlled by several controllers, each controlling its own sub-system. In today’s modern power plants, the DCS functionality is similar to a SCADA system which is often called a ‘centralized’ control system. Both centralized and distributed control systems have their own merits and demerits in the context of reliability and availability.

The typical architecture of a DCS is an organized hierarchy of controllers that monitor and control the processes in any type of power plant. The  DCS, based on the concept of decentralization of interface equipment, is used to control the entire project, interfacing remote areas of the plant using dual redundant fiber optic communication buses.

There are numerous commercial DCSs, and many vendors in the market are providing the systems such as ABB, Honeywell, Siemens, Rockwell (Allen-Bradley), and GE. A DCS provides a single platform to automate the control and operation of an industrial plant. A DCS combines elements of the following hardware and software components: 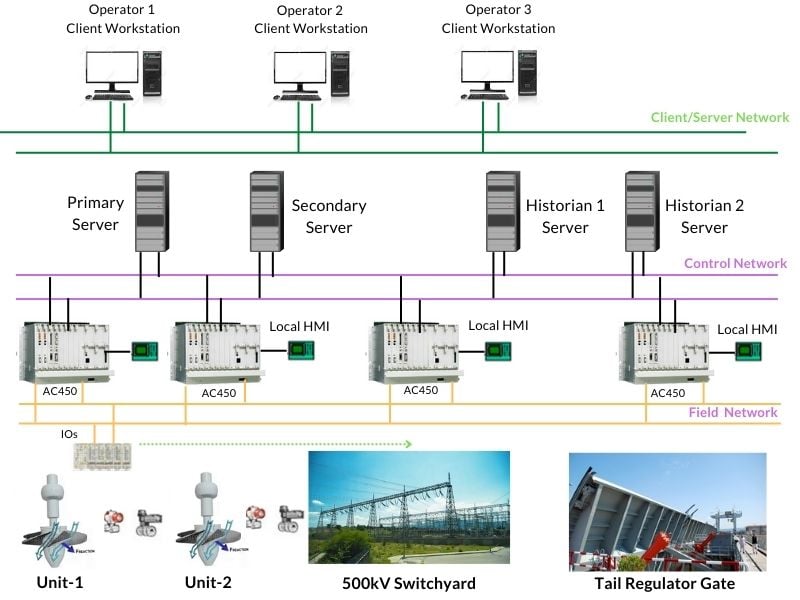 Figure 2. DCS architecture and components in the hydroelectric power plant.

We have layers of field devices, usually PLCs or controllers, in any plant. Whether it is a process or a discrete facility, control is divided into different areas with a dedicated controller node. At a control level, the controllers are networked together in the form of any network topology, and several controllers can communicate with each other using standard or proprietary protocols.

At the field level are instruments like variable frequency drives, valves, motors, transformers, etc. These instruments are placed nearer to the process to control and sense and then transmit these parameters to the DCS. The actuators, pumps, sensors, and motors are interfaced with relevant, dedicated PLCs. The field level is the initial and most basic level of any DCS and covers many different sensors (speed, flow, voltage, and pressure) and outputs. All of this equipment is monitored and controlled by the controller.

The controller-level information is sent to the operator consisting of multiple servers. The servers collect and save the process data that is coming from the sensor through PLC nodes in the SQL database management system (DBMS) in the historian server (sometimes called archiving server). The historian server provides data that can be several years old, depending on the storage configuration.

The pair of redundant servers are labeled ‘primary’ and ‘secondary’; if the primary server fails, the secondary server will take the real-time process data because the operation and monitoring are very critical for any power plant. The application programs in these servers read and write data, in other words, receiving and sending parameters to the PLC or controllers. The same process data is then displayed via a graphical interface to the operator, who can issue the commands to wicket gates, unit stop commands, and valves and then open/close the breakers.

The engineering workstation has all PLC/controller programs, network topology, and backups. The engineering server is usually equipped with vendor-specific offline tools to monitor the PLC program and is used to download and upload the program in the particular controller in case of any modification in the logic or restore the program in case of a crash. In a Siemens system for example, the engineering workstation is equipped with SIMATIC manager software to program the PLC and software packages for HMI.

An operator workstation of the DCS provides a powerful operator interface for monitor and control of the whole facility. The main functions include:

Normally, the generating units are controlled from the DCS from the central control room. The control of each unit is also possible through automatic load frequency control mode.

This mode of control is available only from the unit local control panel (ULCP), connecting to the DCS by using an operating station (usually a PC with touch screen display) mounted in each ULCP.  This mode is used when the central controller is not available.

This mode of control is for the generating units from DCS operator workstations in the control room. When the selector switch at the ULCP is selected to ‘Remote DCS’, the unit can be started automatically through a single-stroke operation. Usually, all the operations on units, lines, and auxiliaries are carried out on Remote DCS.

Hard wired control is intended to be used in the event that the DCS for a unit is not available. Under this mode of control, the unit is controlled by using conventional push buttons, selector switches, and indicators. This control mode is only used when both the Local and Remote DCS modes are not available.

In large DCSs, the Maintenance Management and Inventory Control System (MMICS) is basically a separate system that works in coordination with the DCS. It collects data from the DCS network and is primarily meant for the maintenance of the main plant assets that require maintenance at certain intervals during the plant’s lifetime. This system maintains a record of spares of all the types of equipment installed at the plant. The MMICS enables the client to be prompted when maintenance is required on a particular piece of equipment. 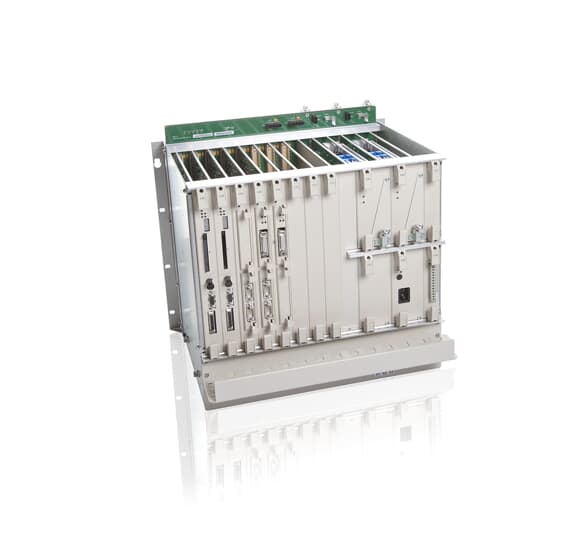 ABB Advant OCS is a system for industrial automation that consists of a family of computer-based units. Advant OCS is an open, integrated, and distributed control system for all kinds of industrial automation applications and provides software solutions in all process and control areas, from small to large systems, and communication capabilities on all levels, from field buses to high-speed plant networks.

A controller is a computer-based device in which control applications or programs are running. Advant Controller 450 (AC450) is a versatile and large controller from ABB used for mixed binary, regulatory, and supervisory control. It can be used standing alone, or as an integrated controller in a DCS, communicating with other equipment. The controller was introduced in 1995 and stayed in the product life cycle active phase until 2020.

Many worldwide plants are still running the old AC450 controller in their facility. A few plants have completely replaced the Advant OCS system, with the latest System 800xA DCS interfaced with the existing AC450 controller. The system can handle thousands of inputs and outputs, connected directly or remotely to the controller. Distributed I/O units, PLC-type controllers, and converters for DC motor drives can be connected via a fieldbus. Sub racks may be required and are installed in one cabinet or several cabinets depending on the number of input and output channels to accommodate an Advant Controller 450 system. 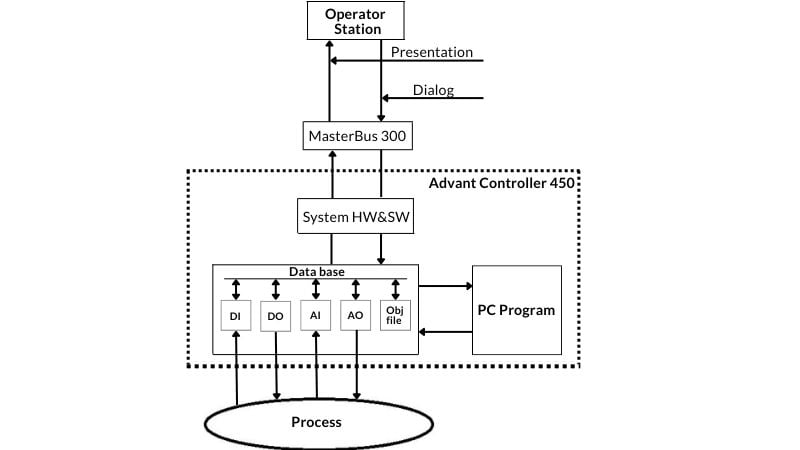 The Advant controller consists of the following components:

The central processing unit (CPU) of the controller 450 comes in two versions: 8 or 16 Mbyte dynamic RAM. The microprocessor module is a Motorola 68040, running at 25 MHz. The module contains indicators and a character display for high-level system diagnostics. The controller has a four-position switch for start/stop and working mode selection and a restart push button. The module front also includes a program card interface and a connection for S100 I/O bus communication.

A DCS provides a single platform to automate the control and operation of an industrial plant. The latest DCS is integrating cybersecurity features to secure the operation and control of plants.