What is Field-oriented Control (Vector Control)?

Field-oriented control (FOC) is a mathematically advanced way of controlling three-phase DC motors and stepper motors to provide better efficiency at higher speeds and more accurate position control. FOC also has the added benefit of providing positioning feedback if necessary for the application in which the motor will be used.

With electric motors, variation in torque is more difficult to create than simply varying current, even though that may be the most obvious assumption at first glance. Torque is created when current is applied perpendicularly to the magnetic field in the rotor. 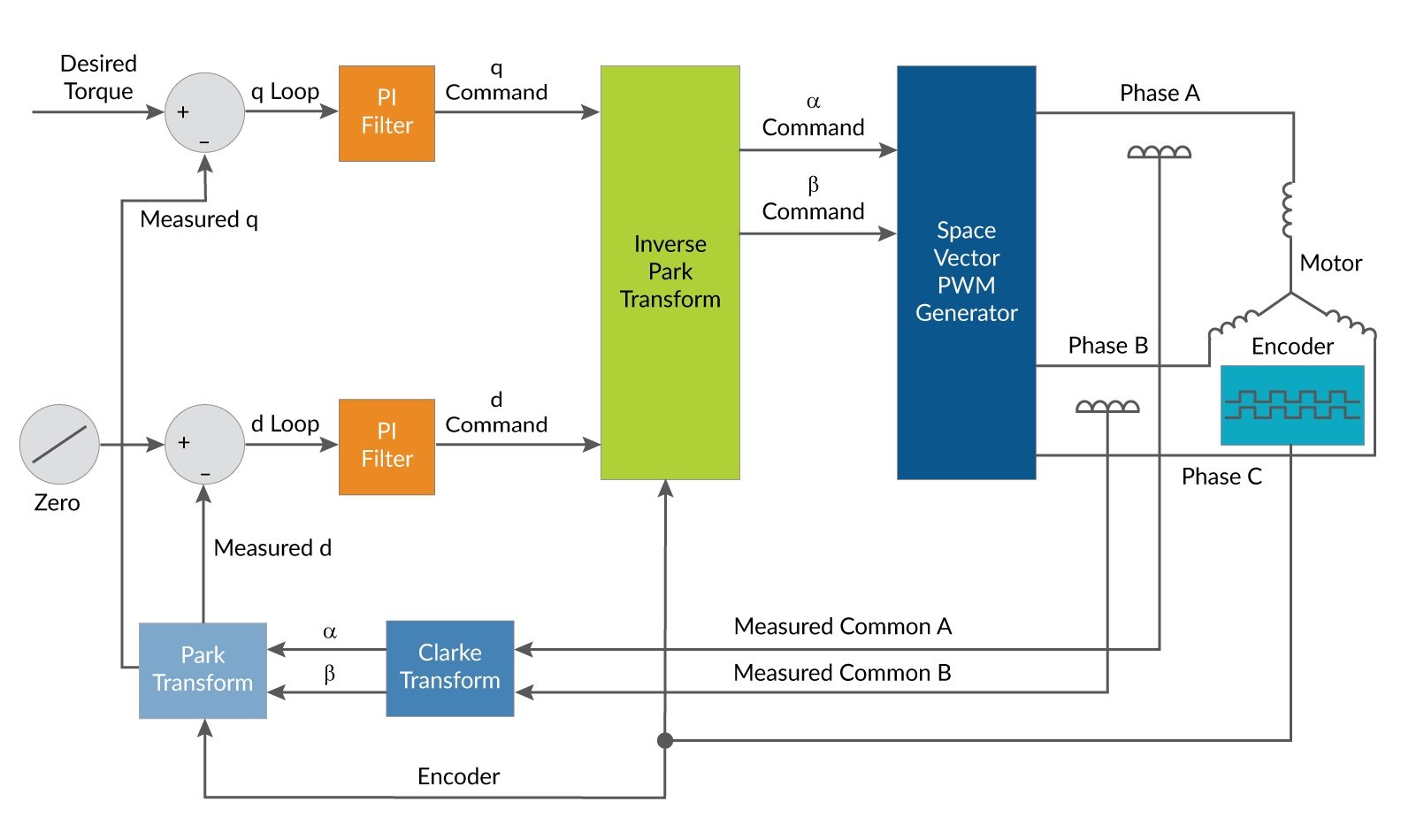 FOC, or vector control, is most commonly used on brushless DC (BLDC) or DC motors that utilize permanent magnets. The position of the rotor and the phase of the magnetic field need to be known entities to provide torque to the motor shaft.

This can be done with different methods. This article will take a look at hall effect sensors to use as a comparison to vector control. The comparison will help to show the advantages and disadvantages of vector control on BLDC motors. 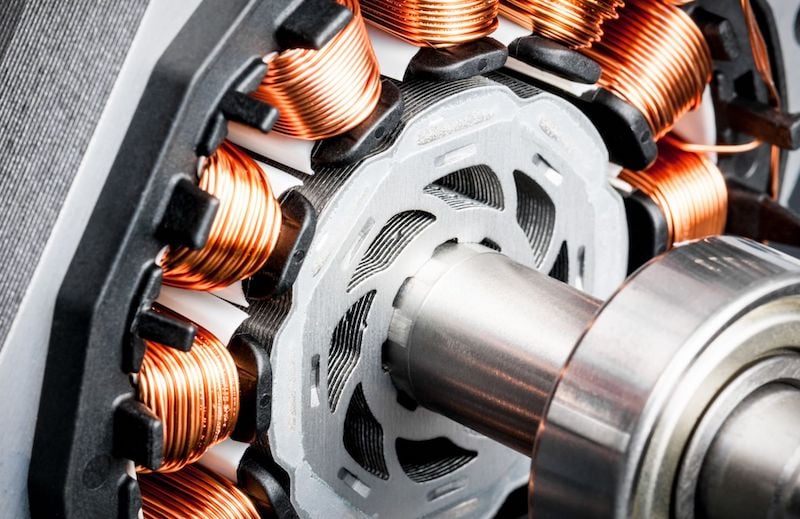 FOC offers an advantage over other types of motor control because it has a significant increase in efficiency as motor speeds reach their limit. It also has the added benefit of achieving higher top speeds than with hall effect. Since motors can run more efficiently with FOC, FOC motors run cooler than their hall-effect-driven counterparts, allowing them to be used in many different applications where heat generation is detrimental to the process.

BLDC motors are capable of more precise positioning and motor control, making them suited to high-precision applications, such as those necessary for robotic and automation control.

How Does Field-oriented Control Work?

BLDC and step motors are multiphase motors—they require an external control unit to function properly. To better understand the differences between types of motors and their control systems, we need to look at the basic principles that make electric motors work.

This arrangement allows the motor to operate without the need for physical brushes inside the motor. Without brushes, the motor does need an external control system to switch polarity on the electromagnets to spin the rotor in a complete rotation. As previously mentioned, hall effect control and FOC are two methods of externally controlling the polarity inside a BLDC motor.

FOC controls motor torque by altering current. The process is more involved, however, than simply changing current to alter torque values. As the rotor spins inside of the armature, only orthogonal force is used to create torque. Quadrature force or flux is current that is not orthogonal, and both of these force values create the total torque values within the motor. 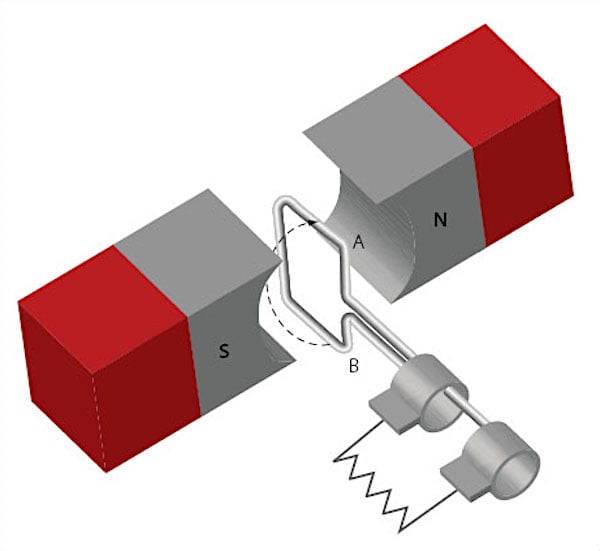 Figure 3. Magnetic flux in a generator.

BLDC motors generally consist of three permanent magnets in the stator placed 120 degrees apart. An orthogonal force is generated as the rotor’s electromagnets are energized inside the permanent magnets on the stator. The shaft can then start to spin; during this phase, the forces on the shaft begin to change from orthogonal or direct to quadrature or flux. If the state of the electromagnets does not change, the motor will stall as the magnetic fields reach equilibrium and the flux component is maximized.

Without brushes, an external control unit has to switch the magnetic states of the electromagnets to maximize the orthogonal current vector. Hall effect sensors can be used to signal rotor position and switch states. However, hall effect sensors make a square transition when switching current values; this is where the inefficiencies lie.

While this method works, it will lag when motor speeds reach their maximum. This leads to inefficiency in the motor operation, which equates to wasted energy and heat.

Vector control makes a smooth transition of current that constantly updates electromagnet states as it turns through its cycle instead of following a square wave. The position is relayed to the FOC control module. Two components of the current vector must be monitored: the orthogonal component and the flux component.

The target value of flux is zero, so the system continuously fluctuates to make the flux value zero. As motor speed increases, flux is an increasing problem for hall effect control since the effect of state switching becomes more pronounced. Higher motor speeds are where vector control has a major advantage. Because the control unit continuously monitors and adjusts to ensure the flux vector is zero, near maximum speed and efficiency are possible.

Where is Field-oriented Control Useful?

FOC is useful for many applications, as numerous industries use BLDC motors. For example, they are used in motors that control robotic arms because of their advanced position data.  FOC can also be helpful in applications requiring excess heat to be at a minimum, such as refrigerated applications and temperature-sensitive processes.

Since there are no brushes in a vector-controlled motor, contact parts are minimum, greatly reducing the amount of noise that comes out of the motor. This makes motors using vector control fit for low noise, low vibration applications.

FOC, or vector control, is one of the most efficient ways to control a BLDC motor. These options offer many distinct advantages over other control methods, leading to a quiet, efficient motor that offers a longer lifespan with reduced wear parts. In addition, BLDC motors can be controlled very accurately, making them fit for high-precision applications, and those requiring a motor that doesn't produce much heat.