In this article, we will take a look at the differences between synchronous and induction motors, as well as the two types of induction motors: squirrel cage and wound rotor. 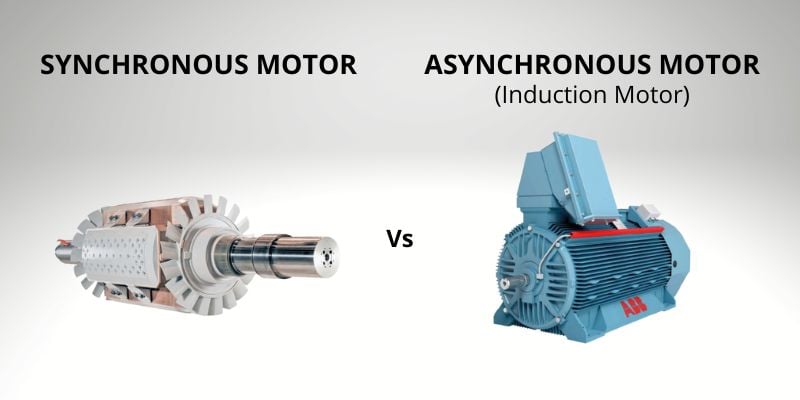 Synchronous and asynchronous motors are both 3-phase motors, however, they operate on different principles. Images adapted and used courtesy of ABB

What is a Synchronous Motor?

Synchronous motors need a secondary DC power supply in order to feed and magnetize the rotor, the DC current is fed to the motor through the use of split rings. Permanent magnets can be used on the rotor as well. Since the motor needs to be operating at synchronous speed to work, a starting mechanism is usually necessary to spin the motor at or near operating speed before the motor can operate properly.

The DC supply for the rotor is usually supplied from the main AC supply, rectified into a DC circuit supplied to the rotor, so while two different supply voltages are required, they both make use of the incoming 3-phase AC supply.

What is an Induction Motor?

Induction motors operate on a different principle than synchronous motors.

Induction is the process of creating current in a conductor by placing it near or inside of a changing magnetic field. Induction is only possible in AC current circuits since it is the changing of the magnetic field when the current switches between states that causes the induced current. stat

Induction motors use this principle to create mechanical torque from the constant magnetic change created with the alternating current in the windings. Because the stator is fed using three phases, a rotating magnetic field is produced that constantly changes relative to the rotor. 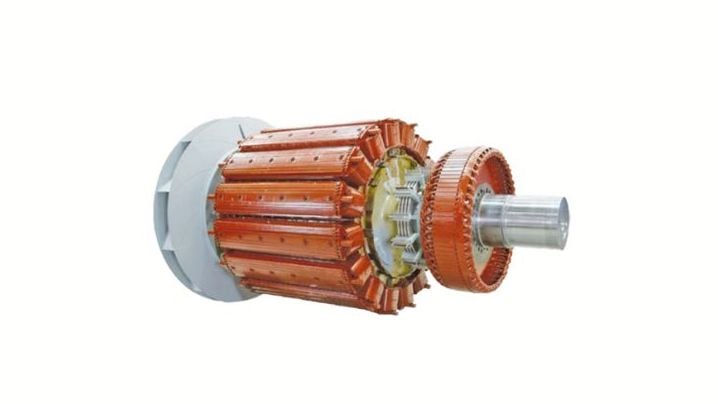 In addition to a DC power supply, synchronous motors need a starting mechanism in order to get the motors up to synchronous speed before the motors can operate under running conditions.

A synchronous motor can be adjusted to have the power factor lagging, in unity or leading by varying the excitation within the rotor. Induction motors are always in the lagging state.

Since synchronous motors are often more complex they usually require more parts and are therefore more expensive. Although their cost may be higher initially, they tend to be more efficient than induction motors, allowing for a recoup of the difference in cost over time.

A look at the inner configuration of a squirrel cage motor. Image used courtesy of ikaxer

These motors are very simple and maintenance costs and manufacturing costs can be greatly reduced because of it. They do not need brushes or the introduction of any DC current. These motors are robust and rugged for applications in tough environments.

Squirrel cage motors are effective small motors but have a disadvantage when used as larger high kilowatt motors because of their high torque draw upon startup. Because of this, they are less efficient in high torque startup applications but are generally more efficient than wound rotor motors in other applications. Without the availability for variable resistance in the rotor, squirrel cage motors lack the ability for speed control. 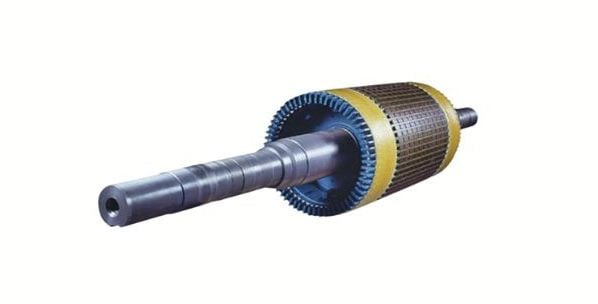 A look at the rotor and slip ring of a wound rotor motor. Image used courtesy of ABB

Similar to squirrel cage motors, wound rotor motors do not have any electrical supply connected to the rotor, they gain electrical potential in the rotor solely through the process of induction.

The stator on a wound rotor motor is similar to that of the squirrel cage motor, but the rotor is built differently. The rotor is built to include slip rings and brushes that conduct the electricity to the rotor since the rotor in a wound rotor motor is insulated. The purpose of slip rings is to create resistance in series with the rotor windings while the motor is starting. This helps to reduce the current draw of the motor on start up. When squirrel cage motors are started current draw can be near 1000%, causing problems when starting large motors.

Wound rotor motors are more complex and expensive than squirrel cage motors, with the added mechanisms for brushes and slip rings. The expense is necessary though for larger motors that may draw too much current upon startup.

The increased torque available in a wound rotor motor makes them more useful in high torque applications such as elevators and conveyors. They are also advantageous where differing motor speeds are necessary because motor speed can be changed by adding variable resistance back into the rotor circuit similar to the process used on motor startup.

3-phase Motors at a Glance

While the poles of a rotor in a synchronous motor match the speed of the poles in the stator, induction motors have rotors that are trying to “catch” the magnetic field in the poles of the stator.

When choosing a 3-phase motor, it’s important to consider how the motor will be used, the kind of environment it will be used in, the motor’s energy efficiency, and of course, cost. 3-phase motors are useful for a number of automation and manufacturing processes, though they do not all operate the same.